According to the "Annual Disaster Statistical Review 2013" published this month by the Centre for Research on the Epidemiology of Disasters (CRED), 2013 is a year with 330 registered natural disasters. This is less than the average annual disaster frequency observed from 2003 to 2012 which is 388, and represents a decrease in associated human impacts of disasters which were, in 2013, at their lowest level in last 16 years.

The death toll of natural disasters still killed a significant number of people totaling to 21 610 but this is largely below the annual average between 2003 – 2012 which is 106 654. 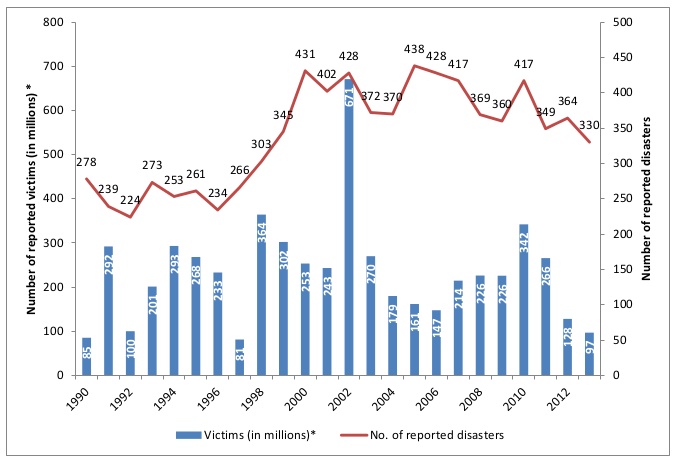 Trends in occurrence and victims (deaths and affected)

For  the last decade, China, the United States, Indonesia, the Philippines and India constitute together the top 5 countries that are most frequently hit by natural disasters.

In 2013, China experienced its highest number of natural disasters of the last decade. The country was affected by a variety of disaster types, including 17 floods and landslides, 15 storms, 7 earthquakes and one mass movement of geological origin, one drought and one period of extreme temperature.

Two disasters killed more than 1 000 people: the cyclone Haiyan the Philippines, in November that resulted to 7 354 deaths and the monsoonal floods in June in India with 6 054 deaths.

The low number of reported natural disasters in 2013, when compared to the annual average occurrence from 2003 to 2012, was mostly due to a smaller number of hydrological and climatological disasters, 18% and 45% below their 2003 – 2012 annual average, respectively. 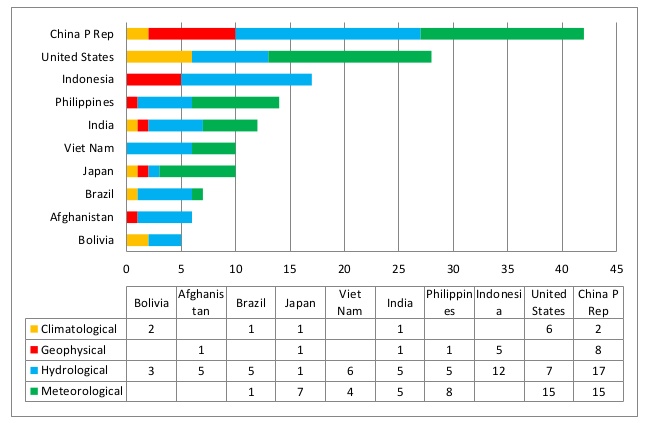 Top 10 countries by number of reported events in 2013

On a more detailed aspect, it appears that, in 2013, the number of people killed by floods totaled to 9 819 was the highest of the decade and the number of those killed by storms: 8 583 the second highest.

Deaths from floods had the largest share of natural disaster fatalities in 2013, representing 45.4% of global disaster mortality, while deaths from storms accounted for 39.7%.

Most disaster victims in 2013 were results of the cyclone Haiyan which affected 16.1 million people, cyclone Phailin in India with 13.2 million and cyclone Utor/Labuyo in China affecting 8 million. Victims from these three cyclones accounted for 38.7 per cent of all natural disaster victims of 2013.

When the 2013 data is placed side by side with the figures from the annual average for the decade 2003 to 2012 of 215.5 million indicate that the number of victims of 96.5 million has decreased.

The Flooding in the South and East Germany was the most costly natural disaster in 2013 with estimated economic damages of US$12.9 billion. Costs from cyclone Haiyan in the Philippines were estimated at US$ 10 billion. An earthquake in the Sichuan province in China, US$ 6.8 billion, the cyclone Fitow, also in China, US$ 6.7 billion, the Calgary flood in Canada, US$ 5.7 billion, tornadoes in May in the United States, US$ 5.5 billion, two floods in China, in Sichuan in July, US$ 4.6 billion and in the North-East provinces in August-September, US$ 5 billion and the hurricane Manuel in September in Mexico, US$ 4.2 billion also added significantly to the total disaster damages of 2013.

With the exception of storms, the decreasing rates of climatological and geophysical disasters is of greater importance. Conversely, damages from floods of US$ 53.2 billion were, in 2013, 90% above their 2003-2012 annual average and were the second highest of the period. The flood in Germany was the third costliest since the flood in China in May-August 2010, US$ 19.2 billion 2013 value, and the flood in Thailand in 2011, US$ 41.4 billion, 2013 value.

The continent of Asia accounted in 2013 for 90.1% of global disaster victims, followed by Africa with 5.1%. Compared to their 2003-2012 annual averages, the number of victims in 2013 increased in Asia and Europe, decreased in Africa and the Americas, and remained stable in Oceania.

Damages were below their annual 2003-2012 average in all continents except Europe. The highest drop occurred in Africa with -80.6% while the lowering was less sharp in the Americas, -48.1%, Oceania, -33.8% and in Asia, -18.0%. Inversely, in Europe costs of natural disasters were 69.8% above their decade’s annual average.

Hydrological disasters contributed most to the increased damages in Europe, mainly due to the flood in South and East Germany. In Europe, the increase in damages can largely be attributed to the two earthquakes in Italy.

A glance at 2013 worst natural disasters

Considered one of the strongest storms ever to make landfall, Typhoon Haiyan tore through the central Philippines on November 8, killing nearly 6 000 people and displacing more than 3.6 million.

The 3.9 meter (13 foot) storm surge and up to 478 km/h (235 mph) wind gusts largely wiped out coastal cities and destroyed much of the region’s infrastructure, such as roads, water and sanitation systems, and telecommunications lines.

“When you look at the mountains, they look bare and stripped of all vegetation,” Aaron Aspi, a World Vision communications officer, told ABC Radio on November 11 from northern Cebu.

The strongest cyclone to hit India in 14 years, Typhoon "Phailin" affected the livelihoods of more than 13 million people in the country’s northeast.

Heavy rains and more than 241 km/h (150 mph) winds brought widespread devastation. But fewer than 50 people died in the mid-October storm. Governments and aid organizations credited improved disaster preparedness and the early evacuation of about 1 million of the most vulnerable residents along the coast.

In June, a multi-day cloudburst hit the North Indian state of Uttarakhand, causing landslides and floods that resulted in more than 5 700 people missing. These people are presumed dead, according to the Uttarakhand government.

Other parts of India were affected but roughly 95% of the casualties occurred in Uttarakhand. This was the country’s worst natural disaster since a tsunami in 2004.

Army and paramilitary soldiers and volunteers rescued more than 100 000 people who were stranded in remote areas cut off by washed-out roads and landslides.

The Indian government originally estimated the death toll at 600 but repeatedly stressed that it would be significantly higher. According to Vijay Bahuguna, the chief minister of the state of Uttarakhand, the exact number of people who died may never be known.

Pakistan was struck by a 7.7 magnitude earthquake that killed over 800 people and injured hundreds more on September 24th.

The earthquake hit hardest north-northeast of Awaran in the province of Balochistan, southwestern Pakistan. On September 28th, another earthquake with a 6.8 magnitude hit Pakistan, killing at least 45 people.

According to The National Disaster Management Authority, more than 30,000 families, an estimated 200,000 people, in the Awaran district, 400 miles southwest of the provincial capital of Quetta, have been homeless since the temblor.

On April 20th, a 7.0 earthquake struck Lushan County, Ya’an, Sichuan, roughly in the same province that was heavily affected by the 2008 Sichuan earthquake.

The earthquake resulted in 196 dead, 24 missing and at least 11,826 injured with more than 968 seriously injured. Many old buildings in Lushan collapsed and several townships suffered major damage.

About 8 000 soldiers from the People’s Liberation Army, 1,400 provincial rescue workers, 120 support vehicles, 180 doctors from a Chinese emergency response team and search-and-rescue dogs were sent into the stricken area after the destruction, with volunteers mobilized from other parts of the country. 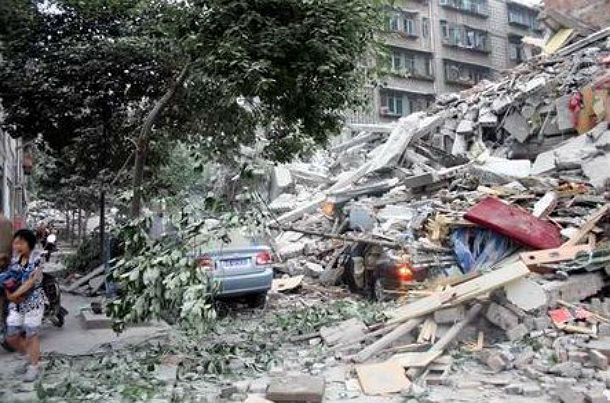 Leave a Reply to Annoyed From The UK Cancel reply