The fissure eruption of Bardarbunga volcano is continuing at a stable level, according to IMO report published at 06:50 UTC today. No explosive activity is observed, the eruption remains an effusive lava eruption. Visual observation by webcam and low level volcanic tremor on seismometers do not show any obvious changes since evening.

From observations yesterday evening, the volume of erupted lava is between 16 and 25 million cubic meters. Gas and steam rises to a couple of hundred meters above the eruption site, extending up to 1 200 m downwind.

The Aviation Color Code for Bardarbunga remains at ‘orange' and the code for Askja volcano at ‘yellow'.

Most of the 250 earthquakes detected from midnight to 06:50 UTC were located in the northern part of the magma intrusion, between the eruption site and south to about 10 km into Dynjujökull. Strongest events were up to around magnitude 2. The rate of events has decreased as a result of pressure release due to the eruption, but there is still ongoing continuous seismicity.

Several events have occurred around the Bardarbunga​ caldera rim, strongest events were M4.2 at 03:09 UTC on the southern rim and M4.5 at 04:59 UTC on the northern rim.  See maps.

In the broader Askja region, most events were located at Herðubreiðartögl, the strongest event there was M2.9 at 02:56 UTC. This area is a quite common place for seismic activity, the activity now is not necessarily caused by increased stress due to the intrusion (the tip of the intrusion is about 25 km SW of this cluster). Askja volcano itself was seismically quiet last night. 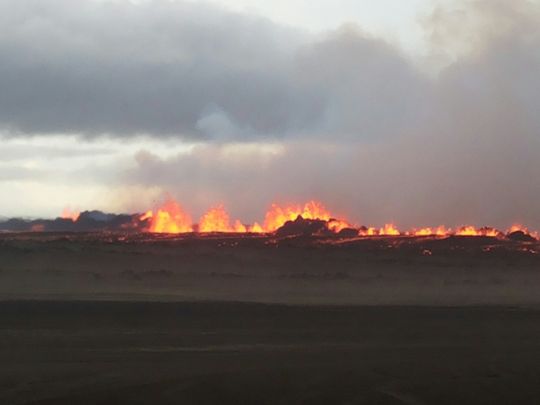 Other scenarios cannot be excluded. (IMO)

The following is a video of Bardarbunga eruption taken on August 31, 2014.