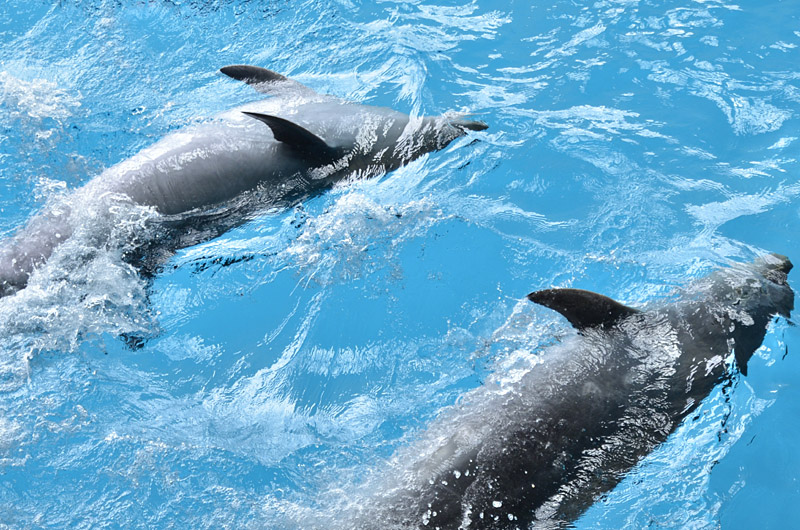 Dolphins have been granted "non-human personhood" status by the government of India, making India the first nation in the world to recognize the unique intelligence and self-awareness of the cetacean order (a class of aquatic mammals).

The decision was announced by India's Minister of the Environment and Forests which also outlawed captive dolphin shows. The ministry added that dolphins "should have their own specific rights." (SOURCE)

Dolphins are extremely intelligent mammals with a highly-developed social structure. Recent research shows that dolphins call each other by name and can remember the unique name whistles from old "friends" heard just one time 20 years ago.

Dolphins choose their own unique name — a series of complex whistles — before they reach one year of age. From that point forward, all the other dolphins in their social group call them by that unique name.

Previous research has shown that dolphins have human-like self awareness and engage in highly complex communications with other dolphins using grammatical sentence structure. Yes, dolphins have their own complete language, much like humans. (See the Dolphin Communication Project.) The main difference between dolphin language and human language is that dolphins aren't vaccinated as young children and injected with brain-damaging mercury. Therefore, dolphins grow up able to speak in fully coherent sentences while many humans now are cognitively deficient and unable to compose meaningful sentences. (They are literally brain damaged by vaccines, mercury fillings and toxic chemicals in foods, medicines and personal care products. Idiocracy has arrived!)

As this 1999 scientific paper on dolphin communication explains about a dolphin named "Ake:"

…the relation of thematic role to word order were firmly incorporated into Ake's concepts of the grammar of the language, strongly suggesting knowledge of argument number. Overall, this set of findings underscores the robustnesss of comprehension by Ake of her learned language… [the test] required an understanding of grammatical and semantic relations and of pragmatic issues deriving from the link between thematic role and syntactic position.

Ake, in other words, is grammatically smarter than many adult humans as is evidenced by the fact that many human beings no longer have any ability to parse meaningful concepts from language and instead are nothing more than "hypnosis subjects" who punch chads at the voting booths and live on Cheetos and Gatorade.

Why I support the "personhood" of cetaceans

Let the record show that I fully support non-human personhood status for dolphins and other cetaceans (whales, dolphins, purpoises). The idea of violently kidnapping these intelligent mammals from their wild habitat and forcing them to engage in parlor tricks for an audience of sunburned, nutrient-depleted vaccine-damaged ice cream-licking over-medicated drooling human children is wildly offensive to all intelligent beings (meaning the dolphins).

It would be far more appropriate to tow a raft full of these "flotation device" human junk food slurpers into the ocean and let a group of intelligent dolphins observe them performing stupid human tricks for Pop-Tarts and aspartame-laced diet soda.

See some of these stupid human tricks for yourself in these videos:

"Man folds himself into hide-a-bed"
https://www.youtube.com/watch?v=tK8IJNvez6E

"Woman spits out gum and sucks it back in"
https://www.youtube.com/watch?v=sJPTEZjz-74

I'm sure any dolphin would pay good money to watch a few more. Perhaps they will kidnap human children off the street and force them to live on island cages in the middle of the ocean where they have to endlessly perform stupid human tricks with no hope of ever escaping their maddening confinement.

Yes, this part of the article is pure satire. (Any dolphin would have already known that.)

And yes, I have far more faith in the intelligence of dolphins than I do the intelligence of humanity. Dolphins, after all, don't build nuclear bombs, radioactive power plants or GMOs, and they sure don't inject their own children with mercury and genetic fragments from diseased animals. Only humans are stupid enough to do that.

Every animal on the planet instinctively protects its young… except humans. Human mothers actually turn their children over to insane doctors who inject them with methyl mercury (vaccines), an extremely toxic brain poison that "lobotomizes" human brains and turns brilliant children into low-IQ future slave workers.

Perhaps one day human scientists will finally be able to talk with dolphins. If so, I'm sure one of the first questions we'll be asked by them is, "Why do you brain damage your own children and call it medicine?"