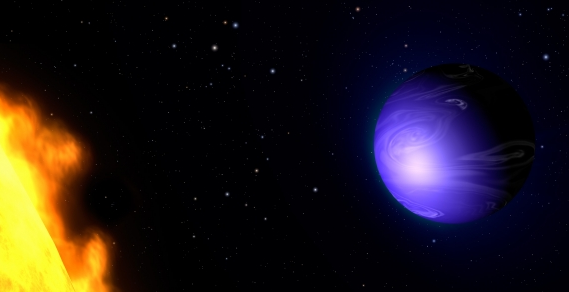 Astronomers at NASA's Hubble Space Telescope have, for the first time, identified a true color of planed out of our Solar System. The planet is 63 light-years away and is boringly named HD 189733b but it is rather interesting, bizarre and exotic. It is also the closest exoplanet that can be seen crossing the face of its star.

It has been intensively studied by Hubble and other telescopes, and its atmosphere has been found to be dramatically changeable and exotic, with hazes and violent flares.

"This planet has been studied well in the past, both by ourselves and other teams," says Frédéric Pont of the University of Exeter, UK, leader of the Hubble observing programme and one of the authors of this new paper. "But measuring its colour is a real first — we can actually imagine what this planet would look like if we were able to look at it directly."

In order to measure what this planet would look like to our eyes, the astronomers measured how much light was reflected off the surface of HD 189733b — a property known as albedo.

To isolate the planet's light from this starlight, the team used Hubble's Imaging Spectrograph (STIS) to peer at the system before, during, and after the planet passed behind its host star as it orbited. As it slipped behind its star, the light reflected from the planet was temporarily blocked from view, and the amount of light observed from the system dropped. But this technique also shows how the light changes in other ways — for example, its colour.

"We saw the brightness of the whole system drop in the blue part of the spectrum when the planet passed behind its star," explains Tom Evans of the University of Oxford, UK, first author of the paper. "From this, we can gather that the planet is blue, because the signal remained constant at the other colours we measured." 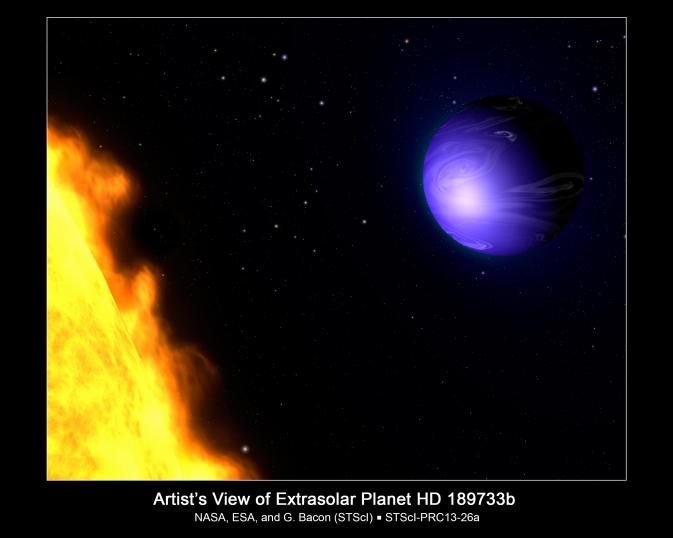 If seen directly, this planet would look like a deep blue dot, reminiscent of Earth's color as seen from space but that is where the comparison ends.

The cobalt blue color comes not from the reflection of a tropical ocean as it does on Earth, but rather a hazy, blow-torched atmosphere containing high clouds laced with silicate particles. Silicates condensing in the heat could form very small drops of glass that scatter blue light more than red light.

Studies has found its atmosphere to be changeable and exotic.

HD 189733b belongs to a class of planets known as "hot Jupiters". These massive planets are similar in size to the gas giants in the Solar System, but instead lie very close to their parent star — this size and proximity to their star make them perfect subjects for exoplanet hunting. We know that hot Jupiters are numerous throughout the Universe. As we do not have one close to home in our own Solar System, studies of planets like HD 189733b are important to help us understand these dramatic objects.

Clouds often play key roles in planetary atmospheres. Detecting the presence and importance of clouds in hot Jupiters is crucial to astronomers' understanding of the physics and climatology of other planets. 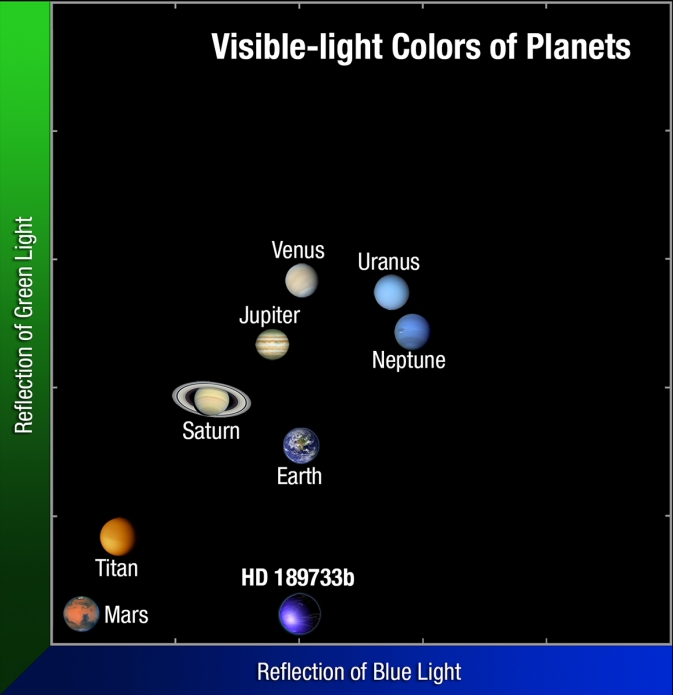 This plot compares the colors of planets in our Solar Sytem to exoplanet HD 189733b. The exoplanet's deep blue color is produced by silicate droplets, which scatter blue light in its atmosphere. Image Credit:  NASA, ESA, and A. Feild (STScI)

HD 189733b was discovered in 2005. It is only 2.9 million miles from its parent star, so close that it is gravitationally locked. One side always faces the star and the other side is always dark.

In 2007, NASA's Spitzer Space Telescope measured the infrared light, or heat, from the planet, leading to one of the first temperature maps for an exoplanet. The map shows day side and night side temperatures on HD 189733b differ by about 500 degrees Fahrenheit. This should cause fierce winds to roar from the day side to the night side.

The paper with this discovery explained is titled "The deep blue colour of HD 189733b: albedo measurements with HST/STIS at visible wavelengths", it will appear in the August 1, 2013 issue of the journal Astrophysical Journal Letters.