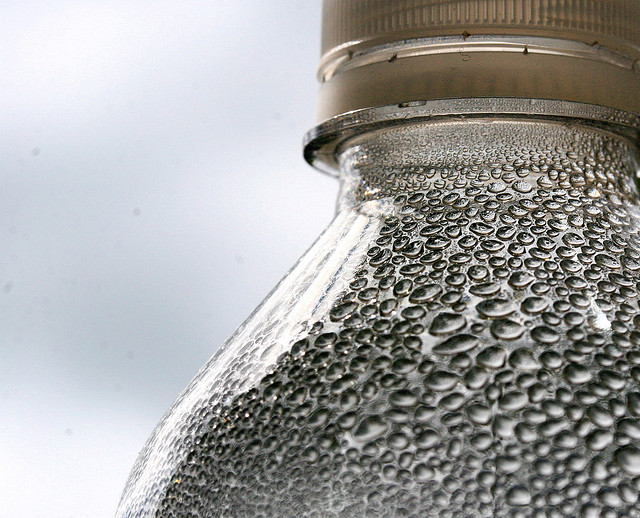 It looks like it very well may be. And we're not talking about nicotine-supplemented water meant to help wean smokers off of nicotine. We're talking the kind of bottled water people drink to avoid the pollutants found in municipal drinking water supplies.

The researchers were surprised to learn that the bottled water contained 58 active pharmaceuticals, and five of the ten brands contained significant amounts of nicotine.

The nicotine content of these five brands ranged from 7 nanograms per liter to 15 ng/L. The researchers admitted that these levels were low. However, they added:

Despite the low nicotine concentration measured, the presence of this compound in bottled water still raises concern. Health risk assessment researchers have postulated that the risk to adult healthy humans from oral intake of nicotine at low levels is negligible. However, no studies have been conducted to assess the human health risk of vulnerable populations such as pregnant women and newborns. This population is the target of advertising on the purity and quality characteristics of bottled mineral water.

While this is the first study to document bottled waters containing these chemicals, there are other studies, even newer, confirming identifiable concentrations of nicotine, pharmaceuticals and pesticide chemicals in municipal drinking water.

In the UK for example, the British Geological Survey analyzed and tested ground water and drinking water supplies and also found nicotine along with caffeine and a variety of pharmaceuticals – such as carbamazepine and triclosan.

And many bottled waters are merely municipal tap water, sometimes run through a filtration unit. However, these filtration systems are typically designed to remove macro-pollutants such as lead and arsenic, but they may not filter out micropollutants such as pharmaceuticals and nicotine.

Studies finding pharmaceuticals in drinking water began to be published in the last decade. These were no fluke, however. And newer studies are confirming a growing problem among the world's drinking water supplies.

For example, this year research from the Czech Republic's Department of Water Hygiene at the National Institute of Public Health collected samples from 92 drinking water supplies, feeding half of Czech population.

They found the highest levels of pharmaceuticals to be ibuprofen, carbamazepine, naproxen, and diclofenac. These concentrations ranged from 0.5 to 20.7 nanograms per liter.

Most municipal water treatment facilities do not filter out pharmaceuticals or other microtoxin metabolites from pesticides and other chemicals. New oxidation-driven systems are being tested, but these are not online in most municipalities. Micro-filtration units are also a possibility.

Another study from Spain – this from the Pharmacy Department of the University of Valencia – found numerous pharmaceuticals among the region's ground water and drinking water supplies. They found 94% of the sediment and 80% of farming soils were polluted with carbamazepine, acetaminophen and others. They also found much of the drinking water supplies, pharmaceuticals were present at levels as high as 112 nanograms per liter. Soils contained lower concentrations, 15 nanograms per liter.

The researchers also pointed out high levels of fluoroquinolones and ibuprofen are threatening fish and otherwise contaminating the environment.

Meanwhile, last fall Polish researchers found the presence of beta-blockers and beta-agonists among their waterways.

And researchers from Australia's University of Queensland studied waterways and water supplies close by hospitals. They found 57 different pharmaceuticals among these waterways, including many antibiotics – which entered into the system from hospitals and residential areas alike.

Researchers from the Netherlands found 12 pharmaceuticals in the drinking water supplies, as well as seven transformation products (metabolites that form other toxins).

Swedish researchers tested four waterways in the Montreal, Canada region between 2007 and 2009. They found significant levels of caffeine and a number of pharmaceuticals drugs – including carbamazepine, naproxen, gemfibrozil, and trimethoprim. They also found progesterone, estrone, and estradiol, along with the herbicide triazine – with atrazine, deethylatrazine, deisopropylatrazine, simazine, and cyanazine.

Researchers from the U.S. Geological Survey's California Water Science Center analyzed ground water supplies that feed numerous drinking water systems throughout California. They found pharmaceuticals affecting two to three percent of the 1231 ground water systems tested. However, in this study only 14 pharmaceutical compounds were tested for, out of hundreds possible. And out of these 14 tested, seven were found in concentrations that were equal or greater to detection limits. These seven included acetaminophen, caffeine, carbamazepine, the highly addictive codeine, the caffeine metabolite p-xanthine, and the antibiotics sulfamethoxazole and trimethoprim. The samples also contained various pesticides, VOCs (volatile organic compounds) and others.

The research found that ground water supplies in the Los Angeles area were much more likely to contain pharmaceuticals, and contain higher levels of them.

It should be noted that several brands of commercial bottled waters (and many other foods and beverages containing water) are packaged in the Los Angeles area.