The World Meteorological Organisation revealed in Statement on the Status of the Global Climate, that during the August to September 2012 melting season, the Arctic’s sea ice cover was just 3.4 million square kilometres (1.32 million square miles). That is equal to 18% less than record low set in 2007. Last year was the ninth warmest year since recorded history and the 27th consecutive year that the global land and ocean temperatures were above the 1961–1990 average. 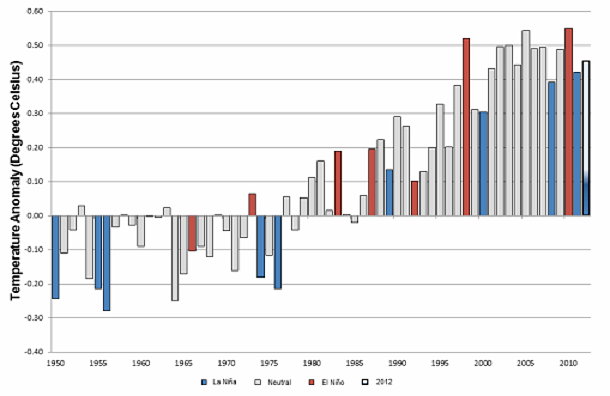 Global land and ocean surface temperature anomalies with respect to the 1961-1990 base period (Source: WMO) 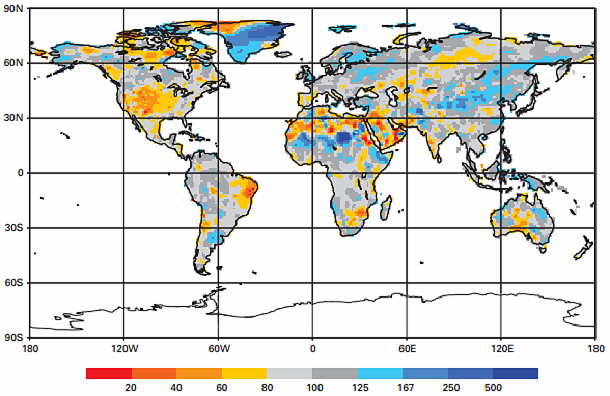 According to data from the Global Snow Laboratory, snow cover extent in North America during the 2011/2012 winter was below average. The previous two winters (2009/2010 and 2010/2011) had the largest and third largest snow cover extent, respectively, since records began in 1966. 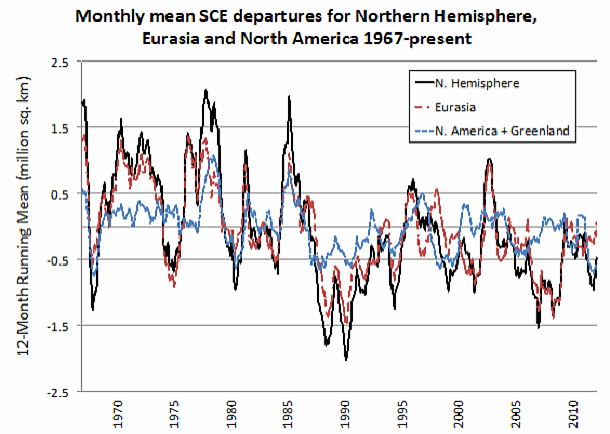 Twelve-month running anomalies of monthly snow cover extent over Northern Hemisphere lands (including Greenland) as a whole and Eurasia and North America separately between November 1966 and December 2012. Anomalies are calculated from NOAA snow maps. Mean hemispheric snow extent is 25.0 million sq. km  for the full period of record. Monthly means for the period of record are used for 9 missing months between 1968 and 1971 in order to create a continuous series of running means. Missing months fall between June and October, no winter months are missing. (Credit: Rutgers University Climate Lab)

Nearly half of the surface of Greenland’s ice sheet melt naturally every summer but ice cover melted dramatically in July 2013, with an estimated 97 % of the ice sheet surface having thawed. This was the largest melt extent since satellite records began 34 years ago. A high-pressure system brought warmer-than-average conditions to Greenland, which are associated with the rapid melting, particularly across the lower elevations.

According to statement, physical characteristics of extreme weather and climate events are being increasingly shaped by climate change. WMO Secretary-General Michel Jarraud dubbed it a “disturbing sign of climate change.” Jarraud also noted that the rate of warming varies from year to year due to a range of factors, including the El Nino and La Nina weather phenomena in the Pacific Ocean, as well as volcanic eruptions.
THE 10 MAJOR WEATHER AND CLIMATE EVENTS OF THE YEAR
• Global temperature continued to record positive anomalies; 2012 ranked among the 10 warmest years on record (base period: 1961–1990).
• Arctic sea ice continued its fast decline, reaching the lowest minimum sea-ice extent on record.
• Extreme heat affected Canada, the United States and Europe.
• Extreme drought conditions affected the United States and southeastern Europe.
• West Africa was severely hit by extreme flooding.
• The populations of Europe, northern Africa and northern Asia were acutely affected by extreme cold and snow conditions.
• Pakistan was affected by severe flooding for a third consecutive year.
• Hurricane Sandy, the costliest tropical cyclone of the year, ravaged the eastern seaboard of the United States.
• Typhoon Bopha, the deadliest tropical cyclone of the year, hit the Philippines in December.
• The polar ozone hole was the second smallest in the past 20 years.
The newly released statement points that the continued upward trend in atmospheric concentrations of greenhouse gases and the consequent increased radiative forcing of the Earth’s atmosphere confirm that the warming trend will continue.

In a summary of current climate change findings and figures, WMO experts point that:

The 2012 climate assessment, the most detailed to date, will inform discussion at WMO’s Executive Council meeting (15-23 May 2013).