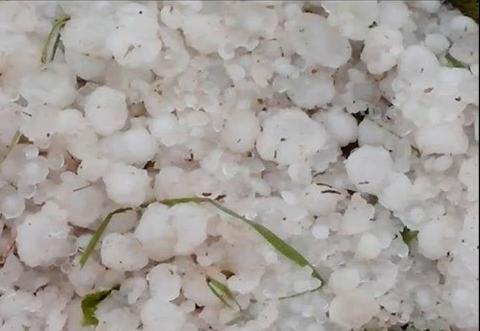 More than 10 000 homes were damaged and 26 people injured during a 20-minute long hailstorm in northern Lao Cai province, Vietnam. The hailstones, 8 – 10 centimeters in diameter, were reported to have lashed the 26 communes and towns in the district of Muong Khuong at midnight on Wednesday, March 27, 2013.

The hailstorm left thousands of people homeless after over 10 500 houses were destroyed as confirmed by the National Search and Rescue Committee. Ma Quang Trung, Director of the provincial Department of Agriculture and Rural Development said,

"It was the heaviest so far in the province, and hit the three districts of Muong Khuong, Bac Ha and Si Ma Cai. Previous hailstorms only occurred on a small-scale and were limited to some communes."

Another hailstorm hit three districts in the province of Ha Giang, causing damage to 80 houses. About a week ago, hail and a vortex ripped through Huong Khe District in Ha Tinh Province, where more than 100 houses were damaged. Two days earlier, hail also pounded the mountainous districts in Quang Nam Province as well as the district of Phong Dien in Thua Thien-Hue Province.

Authorities told that this hailstorm was caused by movements of cold and hot air after a cold spell had moved into the northern region on Tuesday. Additionally, this cold spell brought 5 – 10 mm average rainfall to the province.

Warning issued by the Central Hydro-Meteorological Forecasting Center states that hails or thunderstorms can hit any area of country between March and May. Notably, this is the transition period between Vietnam's wet and dry seasons.

Featured image: LR3277/Taken from the video