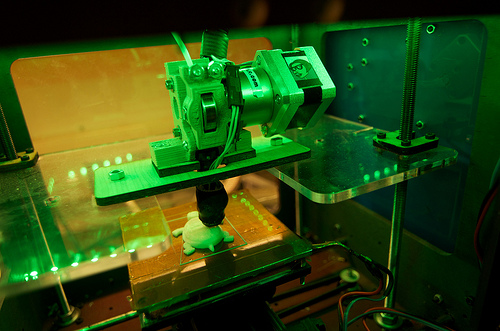 3D printers have been around for a while now, although not many people own them. Not to be confused with Lenticular printing (which creates illusion of depth), 3D printing is a sequential process of creating three-dimensional solid objects of virtually any shape from a digital model. It is also called additive manufacturing wherein successive layers of material are laid down in different shapes. Development of additive manufacturing processes began as early as 1970s (see selective laser sintering). Term 3D printing however, was coined in 1995 by two MIT students who modified an inkjet printer to extrude a binding solution onto a bed of powder, rather than ink onto paper.

What use can these machines be put to?

3D printing has many applications. Industrial use of this technology for rapid prototyping (quickly build a scale model using 3D modelling techniques) and research began during 1980s. Gradually, industries implemented it for rapid manufacturing and  mass production, using it just like other machinery. Twenty-first century saw steep growth in sales of these machines and fall in their prices at the same time – making it a potential household gadget. As these machines can create virtually any shape, hobbyists have been building creative things previously deemed to be possible to build only in factories. BBC one’s inside out show about “printing bicycle with a 3D printer“:

Apart from bicycles, we have seen action figures, jawbones, prostheses and even guns being made using these machines. Firearm models downloadable from internet and printable using a 3D printer is what an american online open source project called Defense distributed envisioned. Whether such technology should be made available to the masses or not is matter of perpetual debate, but it really suggests that 3D printing can be used for DIY projects. Instructables has such interesting DIY projects for that instance.

Additive manufacturing certainly has come a long way from what it was conceived for and lately there has been word of legal suits over patent rights. Last November, Formlabs – a 3D printing startup raised almost US$3 million from their Kickstarter project for affordable, professional 3D printer Form 1 they’re now selling on pre-orders. Notably, this was the highest funded tech campaign in Kickstarter’s history and one that provoked 3D systems to file a legal suit – perhaps the first of its kind. They sued both Formlabs and Kickstarter for infringing patent they hold for a stereolithograpy process (an additive manufacturing technology), which is common to Form 1 and some of 3D System’s high-end industrial machines.

With all this buzz about 3D printing, we can expect to see some remarkable innovation soon. The big question is, will such innovation be able to stand the opposition of copyright laws?