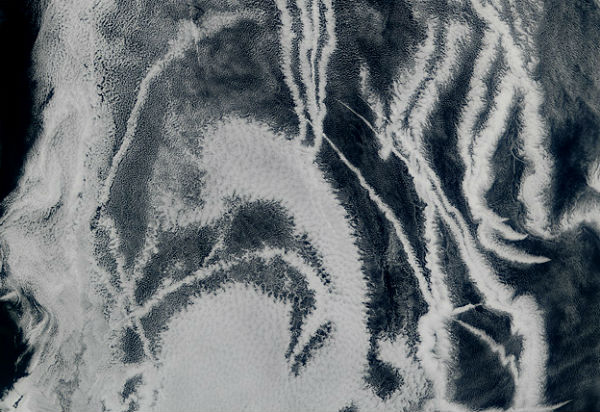 Scientists have observed “ship tracks” in natural-color satellite imagery of the ocean for more than a decade. Bright, linear trails amidst the cloud layers are created by particles and gases from ships, a visible manifestation of pollution from ship exhaust. Combustion engines, such as those that propel ships and motor vehicles, are a major source of NO2 pollution. The NO2 signal over major shipping increased steadily between 2003 and 2008, then dropped sharply due to the global recession and reduction in ship traffic. 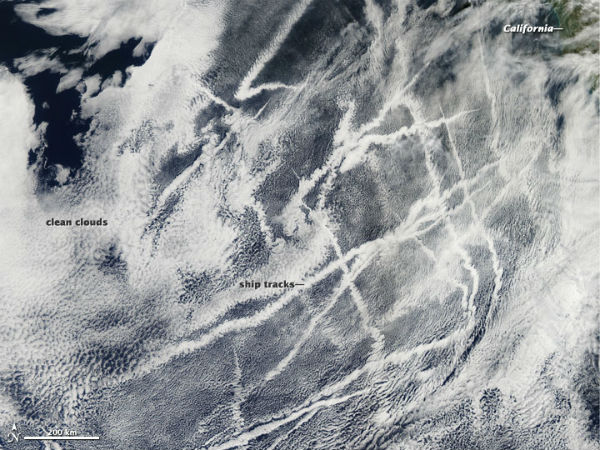 The Moderate Resolution Imaging Spectroradiometer (MODIS) aboard the Aqua satellite captured this natural-color image on February 21, 2012. The criss-crossing clouds off the coast of California stretch many hundreds of kilometers from end to end. The narrow ends of the clouds are youngest, while the broader, wavier ends are older. (NASA images courtesy Jeff Schmaltz, LANCE/EOSDIS MODIS Rapid Response Team at NASA GSFC. Caption by Adam Voiland)

Data from the Dutch and Finnish-built Ozone Monitoring Instrument (OMI) on NASA’s Aura satellite show long tracks of elevated nitrogen dioxide (NO2) levels along certain shipping routes. NO2 can lead to the production of fine particles and ozone that damage the human cardiovascular and respiratory systems. Recent research suggests that shipping accounts for 15 to 30 percent of global NOx emissions. Seventy percent of all ship tracks occur within 500 kilometers of the coast, which means shipping exposes large numbers of people in coastal cities to high levels of health-sapping particulates. 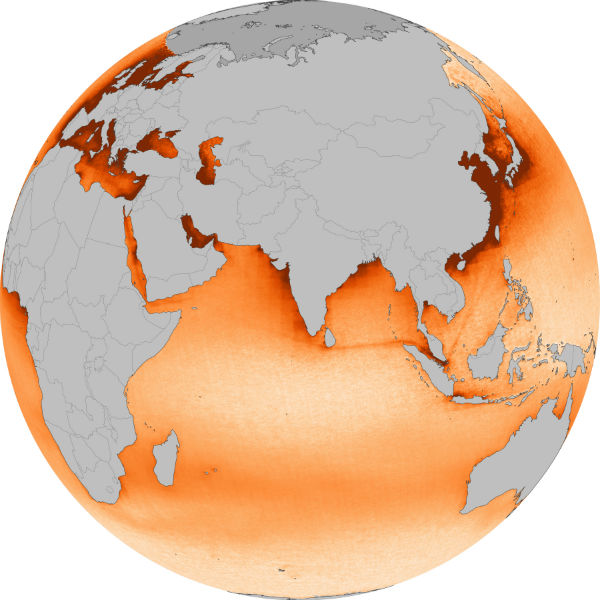 The map above is based on OMI measurements acquired between 2005 and 2012. The NO2 signal is most prominent in an Indian Ocean shipping lane between Sri Lanka and Singapore, appearing as a distinct orange line against (lighter) background levels of NO2. Other shipping lanes that run through the Gulf of Aden, the Red Sea, and the Mediterranean Sea also show elevated NO2 levels, as do routes from Singapore to points in China. These aren’t the only busy shipping lanes in the world, but they are the most apparent because ship traffic is concentrated along narrow, well-established lanes. Heavy NO2 pollution (dark red in the map) from cities and off-shore drilling activity along the coasts of China, Europe, and the United States obscures the ship tracks that might otherwise be visible to OMI. (NASA Earth Observatory image by Jesse Allen, using OMI NO2 data provided courtesy of Lok Lamsal, Aura Project Science Office. Caption by Adam Voiland, with information from Nickolay Krotkov, Anne Thompson, Geert Vinken, and Folkert Boersma)

The shapes of landmasses force ships into narrow paths in the Indian Ocean, while ships in the Atlantic and Pacific tend to spread out over a broad areas as they navigate around storms.

Urban areas and industrialization aren’t the only source of NO2. Agricultural burning in southern Africa and persistent westerly winds make an elevated band of NO2 that stretches from southern Africa to Australia. (In central Africa, easterly winds push pollutants from fires toward the Atlantic, keeping NO2 levels comparatively low over the northern Indian Ocean.) Lightning, which produces NOx, also contributes to background NO2 levels.

The aerosol particles may be natural—such as desert dust or sea salt—or artificial, including the particles emitted by ships. The particles in ship exhaust are more abundant than natural airborne particles such as sea salt, so they generate more and smaller cloud droplets.

The Global Ozone Monitoring Experiment (GOME) instruments on the European Space Agency’s ERS-2 and MetOp-A satellites, as well as the SCIAMACHY instrument on the Envisat satellite, have also measured NO2 levels in the atmosphere.