Recent destructive M 8.0 earthquake that struck Solomon Islands on February 6, 2013, as well as ongoing seismic swarm in the area, is fair reminder that we live in a planet that is undergoing constant change.

According to seismologist’s theories of earthquake cycles. the devastating earthquakes that rocked Tohoku, Japan in 2011, Sumatra in 2004 and Chile in 1960 — all of magnitude 9.0 or greater — should not have happened. And that might mean earthquake prediction needs an overhaul, some researchers say.

All those earthquakes, including the latest at Santa Cruz Islands, struck along subduction zones, where two of Earth’s tectonic plates collide and one dives beneath the other. Scientists had thought that earlier earthquakes had released the pent-up strain along Chile’s master fault, meaning no big quakes were coming. Japan and Sumatra both sat above on old oceanic crust, thought to be too stiff for superquakes. When two tectonic plates collide, they build up strain where a fault sticks, or locks, together. Earthquakes release this strain, which is a form of energy.

For decades, scientists assumed faults acted like rubber bands, steadily building up strain and then releasing it all at once. Some wide accepted models suggested the longer the time since the last earthquake, the larger the next earthquake would be. And records of past quakes, combined with measurements of the speed of Earth’s tectonic plates, suggested the Tohoku and Sumatra-Andaman regions couldn’t make quakes larger than 8.4, almost nine times smaller than a magnitude 9.0 temblor. .

However, seismic activity in recent years showed that subduction faults were capable of producing some of the most destructive earthquakes in recorded history, suggesting earthquake researchers need to re-think aspects of how they evaluate a fault’s earthquake potential.

Researchers failed to recognize that faults could actually store energy. Now, scientists begin to understand that those faults can discharge energy in small amounts, or all at once. So, if a “small” quake hits, it may not release all of the accumulated energy in a fault. A small subduction quake can still register in the magnitude 8.0 range. 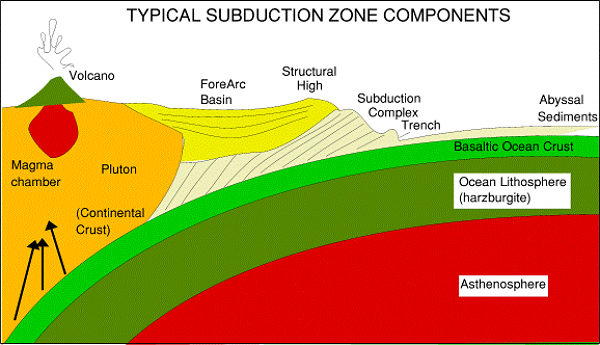 Chris Goldfinger, a marine geologist at Oregon State University in Corvallis, and his colleagues propose in a study published in the January/February 2013 issue of the journal Seismological Research Letters, that  a fault can “borrow” stored energy from previous strain-building cycles, generating larger earthquakes than expected, such as those that hit Sumatra and Tohoku.

Goldfinger said scientists’ failure to recognize that faults could store energy comes from a lack of data. Historic earthquake records go back only 100 years, so in fact, geologists are only now getting histories that reach back thousands of years, via techniques that decode evidence of past earthquakes in sediments.

Goldfinger calls these long-term histories supercycles, and the unusually large and rare earthquakes that discharge the battery are superquakes. The sequence, size and location of quakes vary from one supercycle to the next, he said.

Seismologist Marco Cisternas first proposed that faults could store energy in  a 2005′ study that show the magnitude 9.5 Chile earthquake in 1960 (the largest on record) released more energy than had been stored since its most recent quake (in 1837). Data from tsunami deposits in Chile indicate the last superquake occurred in 1575, and smaller quakes since then had only partly released the strain built up on the fault.

And analyses of corals uplifted and killed during Sumatra earthquake, also indicated that the subduction zone undergoes supercycles, according to a 2008 study led by geologists at the Earth Observatory Institute in Singapore. According to that study, each series of quakes in the region lasts between 30 and 100 years, while the supercycles unfold every 200 years or so. 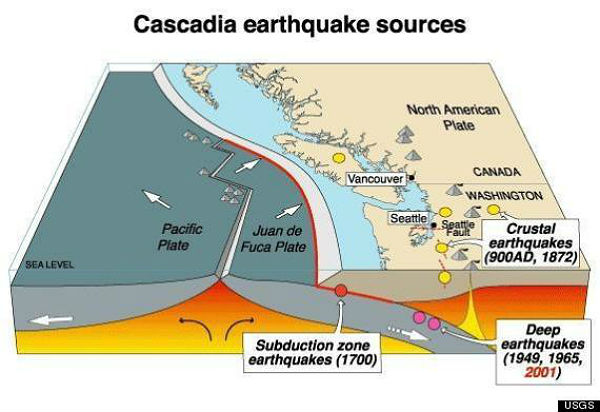 Goldfinger and his colleagues have evidence that the Cascadia Subduction Zone, which stretches from Northern California to British Columbia, is also in the middle of an earthquake supercycle. Over the past 10,000 years, 19 superquakes and four supercycles have occurred along the zone. There have been 22 additional earthquakes that involved just the southern end of the fault. The force required to shove a piece of ocean crust into Earth’s mantle can produce megaearthquakes along the zone, as in Japan and Sumatra. The Cascadia Subduction Zone has not experienced a major earthquake since 1700, when an estimated 9.0-magnitude earthquake generated an enormous tsunami that killed trees in Puget Sound and traveled across the ocean to Japan.

The model of earthquake energy storage and discharge makes it difficult for scientists to forecast future earthquakes, as there’s no explanation yet for why faults would behave this way. And there is no way to find out how much energy a fault stores.