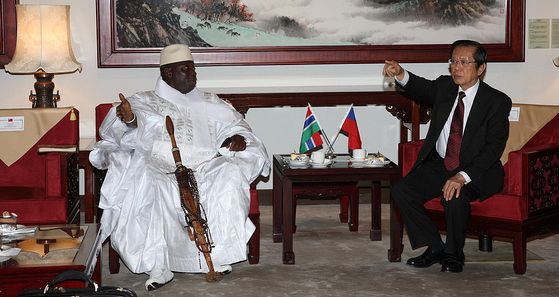 Gambia is a small country in West Africa, with a population of about 1.7 million. Fortunately, Gambia has not been hit as hard by HIV/AIDS as other African countries, and only about 2% of its inhabitants are infected. Under its current president, Yahya Jammeh, Gambia has seen important public health progress, and now, Jammeh has proposed something that has managed to anger all Western medical experts: that AIDS can potentially be cured through natural herbal remedies.

In Banul, Gambia’s capital, Fatuma and her 3 year old son Suleiman are both receiving a herbal concoction that has been hailed as an AIDS cure. “It’s amazing. Two weeks ago, I was very ill, weak and couldn’t eat without vomiting”, she said.

Fatuma and Suleiman are not the only ones to see improvement thanks to the mysterious herbal cure. 54 year old Ousman Sow said he has been HIV positive for over 15 years, and had barely been surviving on anti-retroviral drugs until he was introduced to Jammeh’s AIDS cure program. Within a month, Ousman gained 30 pounds and started feeling much better.

“I am cured at this moment. As I stand before you I can honestly tell you I have ceased to have any HIV symptoms”, he said. CNN reports that multiple patients gave similar stories, but president Jammeh himself refused to talk to the press.

In spite of the numerous testimonies, Western health authorities claim that Jammeh’s cure is nothing more than a dangerous hoax. While the World Health Organisation and the United Nations have criticized the herbal cure for bringing false hope to the sick, and have expressed concern that Gambian people would be tempted to give up using anti-retrovirals, Gambian Health Minister Tamsim Mbowe fully supports the concoction.

According to CNN, Tamsim Mbowe is a certified physician with multiple medical degrees. When asked what he would say to skeptics, Mbowe replied, “as a Western medical trained doctor with 13 years experience meeting different professors, I’ve seen His Excellency, my leader, coming up with herbal medications that are able to treat and cure patients with HIV-virus, which have been proven within all medical and laboratory parameters.”

IMOD is a herbal medicine developed by Russian and Iranian scientists, which is said to stop the spread of AIDS by strengthening immunity. The drug has already been approved by the Iranian Ministry of Health. International health authorities, however, claim the medicine is ineffective.

President Jammeh wants to distribute the cure to all Gambian hospitals, after announcing that the seventh group of successfully cured AIDS patients has been discharged. Although the cure was requested by Western authorities for testing, Jammeh refuses to release the recipe, and nothing else is known about it other than it is based on herbs and spices.

About the author:
A science enthusiast with a keen interest in health nutrition, Antonia has been intensely researching various dieting routines for several years now, weighing their highs and their lows, to bring readers the most interesting info and news in the field. While she is very excited about a high raw diet, she likes to keep a fair and balanced approach towards non-raw methods of food preparation as well.