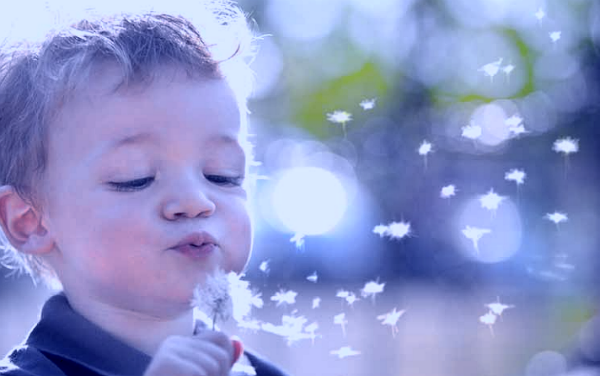 From childhood cancers to learning disabilities and asthma, a wide range of childhood diseases and disorders linked to exposure to pesticides are on the rise.

A new study from the Pesticide Action Network says that the more than 1 billion pounds of pesticides used in the United States every year may be having detrimental effects on children’s health. While the industry and regulatory bodies claim these pesticides are safe and pose no danger to human health, the Pesticide Action Network North America (PANNA) says they’re wrong. Their research indicates these chemicals are contributing to things like autism, birth defects, early puberty, obesity, cancer, diabetes, and asthma. That is ” safe”, right? Dozens of studies linked pesticides with serious health concerns. And effects of pesticides on children are even more pronounced than they are in adults.

According to Kristin Schafer, coauthor of the report, one of the things that is also really clear from science is that children are just much more vulnerable to pesticide exposure. In terms of how their bodies work and defense mechanisms work, how much (pesticides) they’re taking in pound for pound, they’re eating more, drinking more, breathing more than an adult, and are much more susceptible to harms that pesticides can pose.

Opposite to that fact, the pesticide industry says these findings are simply untrue, claiming that their chemicals are harmless for everyone, that they are tested for safety and wouldn’t be used if they weren’t safe. Of course, it is common-known that those companies fund studies that “prove” their safety.

New report reveals that in addition to causing significant harm to children, pesticides have also been tied to infertility, birth defects, obesity, and cancer among adults as well. Worldwide, cancer diagnosis has been linked in over 260 studies to agrochemicals. Scientists have linked pesticides with several types of cancers, including that of the breast, prostate, brain, bone, thyroid, colon, liver, lung, and more.

Brain cancers are the second most common cancer in children. A study published in Environmental Health Perspectives has linked parental use of pesticides with an increased risk of brain cancer in children. Study included 526 one-to-one–matched case–control pairs. Brain cancer cases were diagnosed at < 10 years of age, and were identified from statewide cancer registries of four U.S. Atlantic Coast states. Study found that parental exposures may act before the child’s conception, during gestation, or after birth to increase the risk of cancer. And when the parents are exposed to the pesticides may also play a role in the different cellular changes that lead to cancer.

We recently reported about new shocking research which revealed that toxins implanted into GM food crops to kill pests are reaching the bloodstreams of women and unborn babies at nearly 100%. Most recently, scientists in Canada conducted a study on pregnant and non-pregnant women, looking for the chemicals found in pesticides related to genetically modified foods. This may create perinatal complications as abortion, prematurity, intra-uterine growth restriction and preeclampsia as well as reproductive disorders like infertility, endometriosis and gynecological cancer. 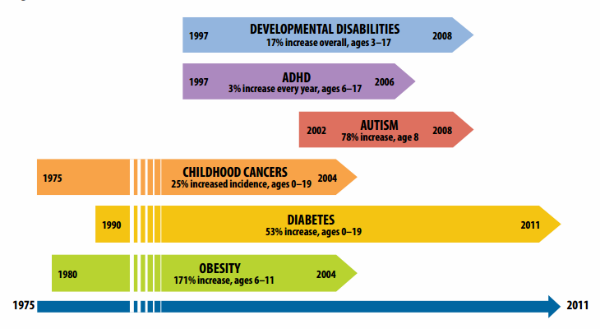 Statistics show steady increases in many childhood diseases and disorders over the past 30 years. Those highlighted here are just some of the health harms on the rise. (Credit: PANNA)

An estimated 1.1 billion pounds of pesticides are used in the U.S. every year, with  more than 20,000 products on the market. This volume  of use is undermining the health of the next generation  and, as the science demonstrates, derailing development  of our children’s potential. The sad thing is that nearly 20 years ago, scientists at the National Research Council called for swift action to protect young and growing bodies from pesticides.

Read “A Generation in Jeopardy – How pesticides are undermining our children’s health & intelligence“ by Kristin S. Schafer and Emily C. Marquez with Medha Chandra, Kendra Hutchens, Margaret Reeves and Meriel Watts. Their analysis reveals the following:

• Compelling evidence now links pesticide exposures with harms to the structure and functioning of the brain and nervous system. Neurotoxic pesticides are clearly implicated as contributors to the rising rates of attention deficit/hyperactivity disorder, autism, widespread declines in IQ and other measures of cognitive function.
• Pesticide exposure contributes to a number of increasingly common health outcomes for children, including cancer, birth defects and early puberty. Evidence of links to certain childhood cancers is particularly strong.
• Emerging science suggests that pesticides may be important contributors to the current epidemic of childhood asthma, obesity and diabetes.
• Extremely low levels of pesticide exposure can cause significant health harms, particularly during pregnancy and early childhood.

Featured image: Cover of A Generation in Jeopardy – How pesticides are undermining our children’s health & intelligence report