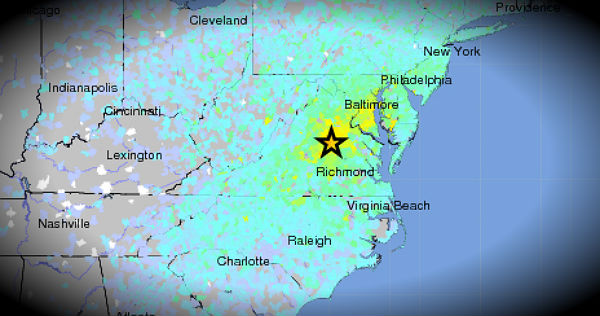 U.S. Geological Survey scientists reveal that earthquake shaking in the eastern United States can travel much farther and cause damage over larger areas than previously thought. New research found that M 5.8 earthquake, that struck Virginia on August 23 last year, triggered landslides at distances four times farther and over an area 20 times larger than previous research has shown. 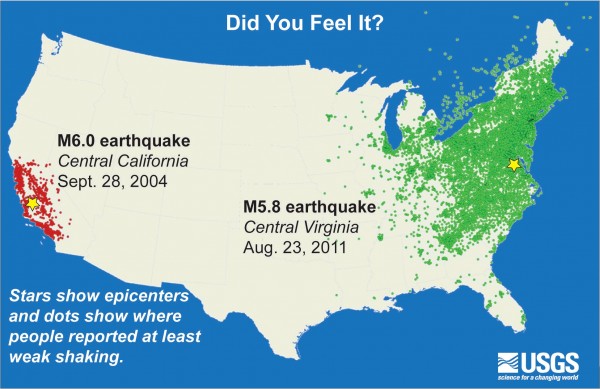 id You Feel It? East vs West: This image illustrates how earthquakes are felt over much larger areas in the eastern U.S. than those west of the Rocky Mountains. The map compares USGS “Did You Feel It?” data from the magnitude 5.8 earthquake on August 23, 2011 in central Virginia (green) to data from an earthquake of similar magnitude and depth in California (red). (Credit: USGS) 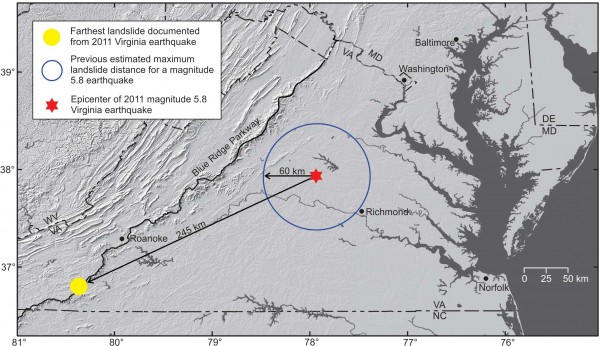 While previous studies of worldwide earthquakes indicated that maximum reach of  landslide affected area occurred about 60 km from the epicenter, new study reveal that the maximum distance limit can be up to 245 km (150 miles) from the epicenter. The previous maximum area affected by landslides for this magnitude was 1,500 km2 , however, new study points that the area affected by landslides was 33,400 km2. It was the largest earthquake to strike the eastern U.S. since 1897 and was felt over an extraordinarily large area. According to Edwin Harp, USGS scientist and co-author of this study, the landslide distances from last year’s Virginia earthquake are remarkable compared to historical landslides across the world and represent the largest distance limit ever recorded. 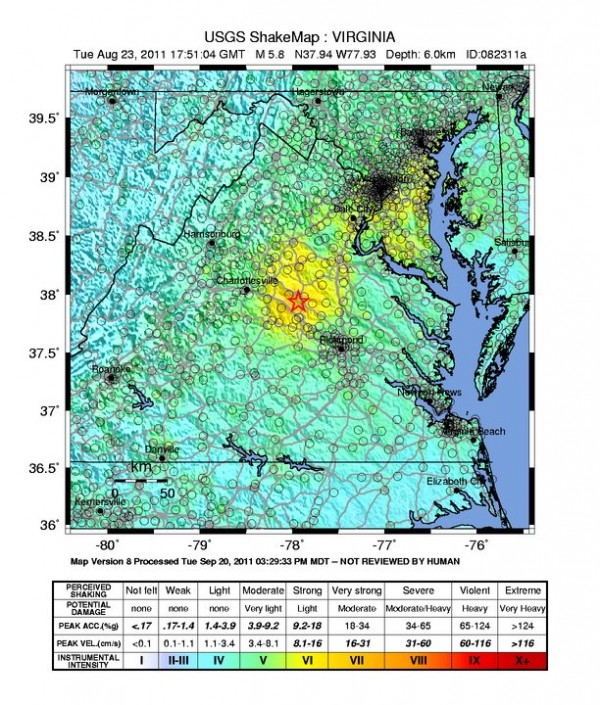 Randall Jibson, USGS scientist and lead author of this study explains that not every earthquake will trigger landslides, but they used landslide distributions to estimate characteristics of earthquake energy and how far regional ground shaking could occur. It is estimated that approximately one-third of the U.S. population could have felt last year’s earthquake in Virginia, more than any earthquake in U.S. history. About 148 000 people reported ground-shaking experiences via USGS “Did You Feel It?” report from areas from southeastern Canada to Florida and as far west as Texas. Photos from the hazard assessment team can be found here.

“What makes this new study so unique is that it provides direct observational evidence from the largest earthquake to occur in more than 100 years in the eastern U.S. Now that we know more about the power of East Coast earthquakes, equations that predict ground shaking might need to be revised.” Randall Jibson 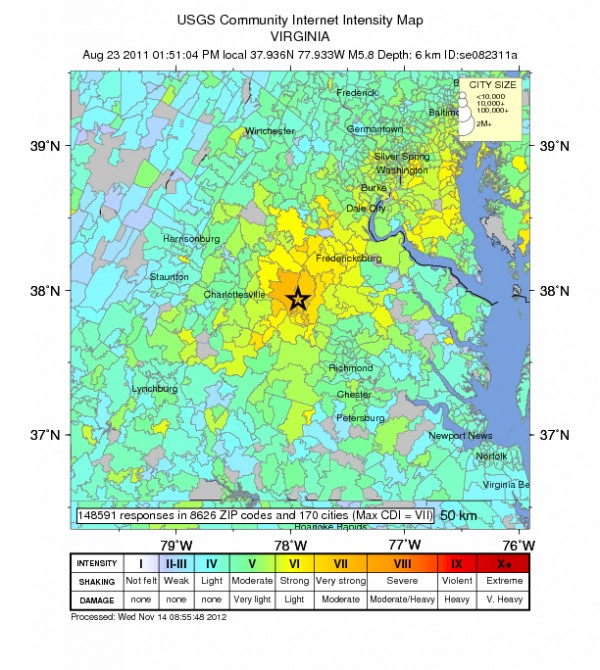 USGS “Did You Feel It?” data, showing reports from the public on feeling the magnitude 5.8 earthquake on August 23, 2011 in central Virginia.

The difference between seismic shaking in the East versus the West is due in part to the geologic structure and rock properties that allow seismic waves to travel farther without weakening. Earthquakes in the central and eastern U.S., although less frequent than in the western U.S., are typically felt over a much broader region. East of the Rockies, an earthquake can be felt over an area as much as ten times larger than a similar magnitude earthquake on the west coast. According to tectonic summary report released by USGS after the Virginia earthquake, a magnitude 4.0 eastern U.S. earthquake typically can be felt at many places as far as 100 km (60 mi) from where it occurred, and it infrequently causes damage near its source. A magnitude 5.5 eastern U.S. earthquake usually can be felt as far as 500 km (300 miles) from where it occurred, and sometimes causes damage as far away as 40 km (25 miles). 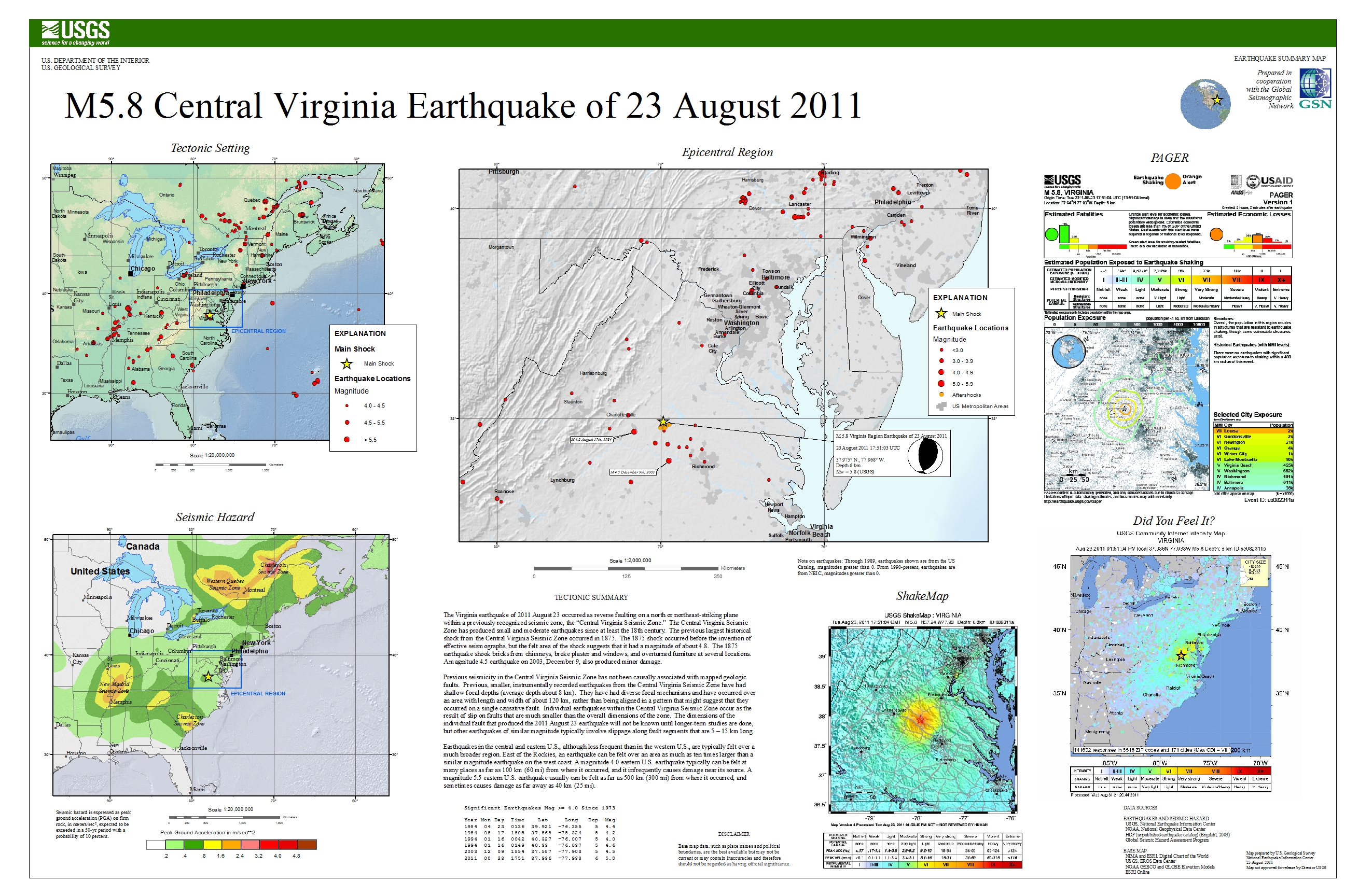 Poster of the Virginia Earthquake of 23 August 2011 – Magnitude 5.8 (Credit: USGS) CLICK ON THE IMAGE FOR LARGER VIEW