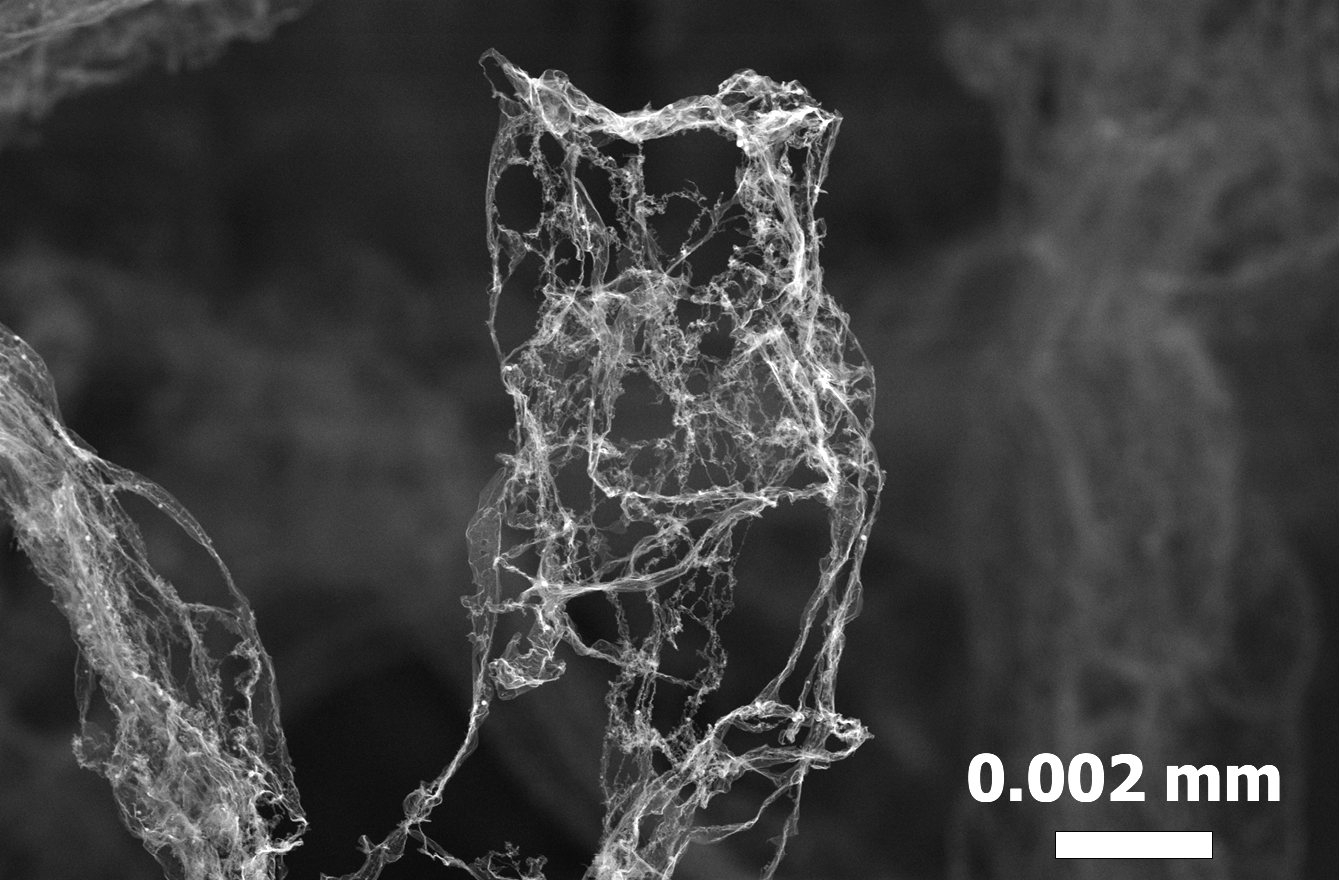 New lightest material developed by German scientists from Keil University and The Hamburg University of Technology (TUHH) is named Aerographite. It is jet-black, remains stable, is electrically conductive, ductile and non-transparent. It is composed of a network of porous carbon tubes that are three-dimensionally interwoven at nano and micro level and it only weighs 0.2 milligrams per cubic centimetre. According to Matthias Mecklenburg, co-author and Ph.D. student at the TUHH, aerographite weights four times less than world-record-holder up to now (Last year, researchers at the University of California Irvine developed a material that was as strong as metal yet 100 times lighter than Styrofoam).

Aerographite is the lightest material in the world, 5,000 times less dense than water, and six times lighter than air. 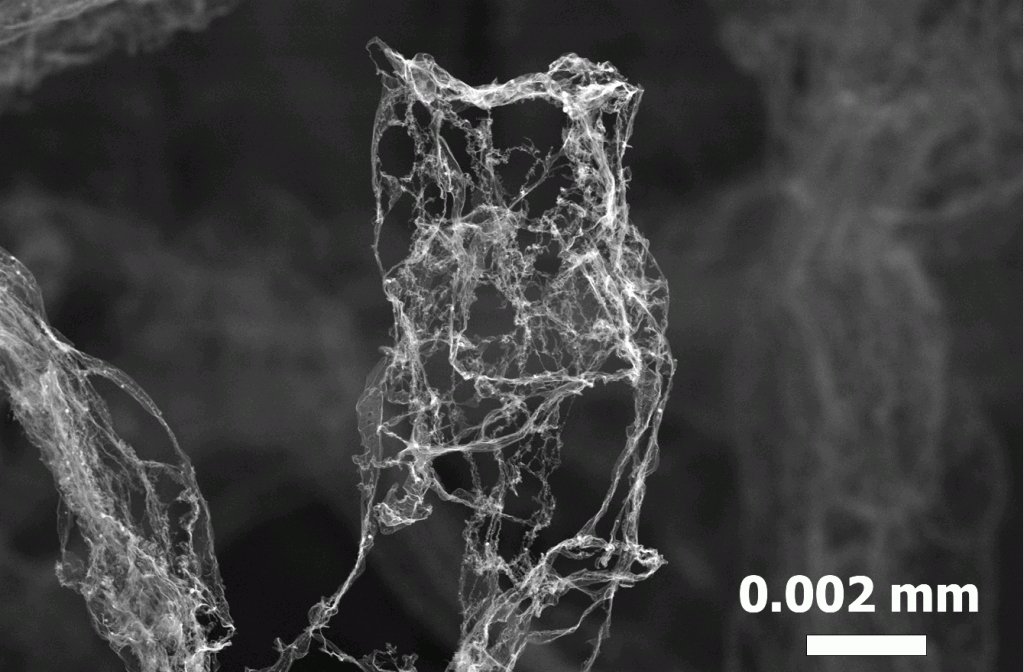 Scientists described the aerographite as an ivy-web, which winds itself around a tree. And then take away the tree. The trees in this case are zinc oxide crystals, which are shaped like four-sided jacks/knucklebones. The crystals are then placed in an oven and coated with a layer of carbon using chemical vapor deposition (CVD). At the same time, hydrogen gas is added to the oven, which steals the oxygen away from the zinc oxide. The zinc falls to the floor of the oven, leaving just the outer skeleton of carbon  aerographite. 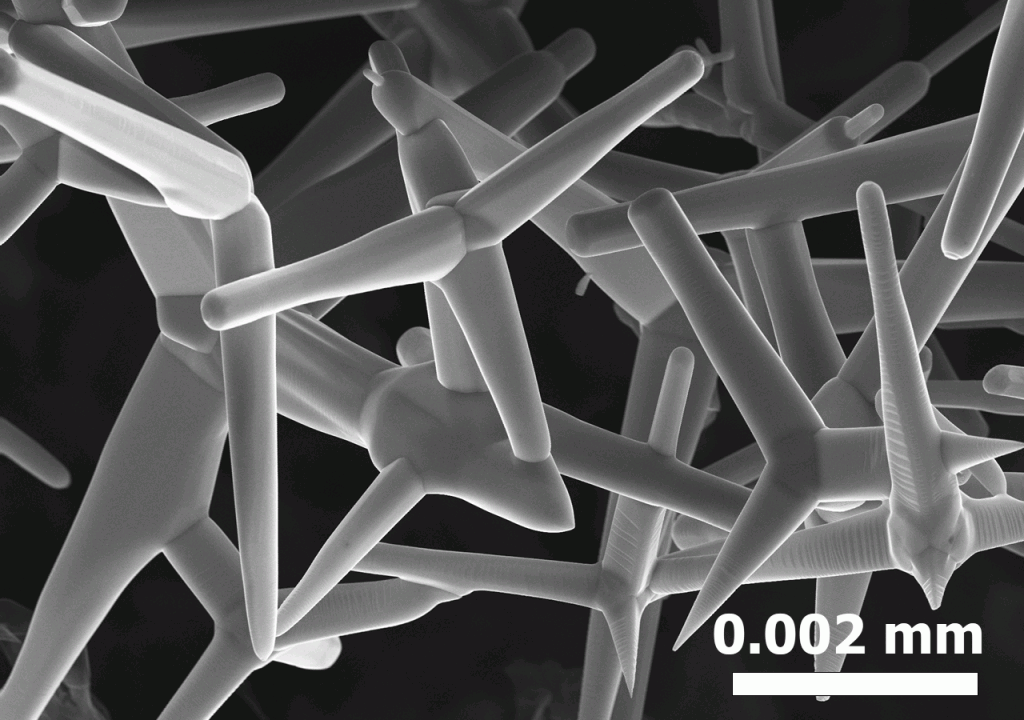 Made by developing a linked chain of carbon nanotubes onto a zinc-oxide template, it is extremely resilient. If you were to compress Aerographite, it would bounce back to its natural state without any damage. Most other materials weaken when they undergo such stress. Because of its characteristics, it can widely be utilized for the future development of electronics, such as in lightweight batteries. Scientists believe these small batteries could be used in green transportation such as electronic cars and e-bikes in the future. Other potential applications include in aviation and satellites, thanks to its high tolerance for vibration, and for use in water and air purification. The number of further possible areas of application for the lightest material in the world is limitless.

It is able to be compressed up to 95% and be pulled back to its original form without any damage. Up to a certain point, the aerographite will become even more solid and therefore stronger than beforeIn contrast to other materials, it thereby just becomes stiffer (Diameter nine millimetres). Also, the newly constructed material absorbs light rays almost completely. Watch Aerographite being compressed.

The very small masses of the Aerographite allow quick changes of direction. It raises itself in an erect position, jumps onto the plastic pole and back onto the table: In that way Aerographite gets electric charge from the pole and emits it to the table.

Aerographite electrodes have been tested in an electric double-layer capacitor (EDLC, also known as supercapacitor) and endured the mechanical shocks related to loading-unloading cycles and crystallization of the electrolyte (that occurs upon evaporation of the solvent). Their power capacity of 1.25 Wh/kg is comparable to that of carbon nanotube electrodes (~2.3 Wh/kg).