California is facing health concerns because of nitrate in drinking water

California is facing a hidden threat to its drinking water supply. Nitrate pollution is a problem for both cities and rural areas, and it could get worse as the state's population grows.

Wells supplying drinking water to millions of Californians has been exposed to harmful levels of nitrates over the past 15 years. One in 10 people living in California’s most productive agricultural areas is at risk of exposure to harmful levels of nitrate contamination in their drinking water, according to a report released by the University of California, Davis. The report was commissioned by the California State Water Resources Control Board. California groundwater quality is a significant concern to the Water Boards, and this comprehensive report presents current science and potential solutions on how to deal with this chronic and longstanding issue. Agricultural fertilizers and animal manure applied to cropland are the two largest regional sources of nitrate leached to groundwater — representing more than 90 percent of the total.

Nitrogen in organic and synthetic fertilizers has dramatically increased crop production in California in recent decades. Nitrogen applied to today’s crops slowly makes its way into groundwater as nitrate. Excess nitrate in groundwater from surface nitrogen use has been linked to thyroid illnesses, some cancers and reproductive problems. Since the 1940s, synthetic fertilizer use, increased manure applications to cropland, and a shift from pasture-raised dairy cattle to confined animal facilities have resulted in the accumulation of excess nitrate in groundwater. Today’s discharges will continue to contaminate drinking water decades from now, the report says.

Part of the natural global nitrogen cycle, nitrogen is a key element that plants require for growth. Yet, in addition to contaminating groundwater, the surge in human-related nitrate over the past century has also created marine “dead zones,” nitrogen oxide emissions that contribute to climate change and a host of other environmental problems.

“Addressing Nitrate in California’s Drinking Water,” is the first comprehensive scientific investigation of nitrate contamination in the Tulare Lake Basin. The study was funded by the State Water Board in response to state legislation passed in 2008 that required an examination of nitrate contamination in the Tulare Lake and Salinas basins. In their new report, UC Davis scientists examine data from wastewater treatment plants, septic systems, parks, lawns, golf courses and farms. The report concludes that more than 90 percent of human-generated nitrate contamination of groundwater in these basins is from agricultural activity.

The nitrate study area includes four of the nation’s five counties with the largest agricultural production, representing 40 percent of California’s irrigated cropland and more than half of the state’s confined animal farming industry. As nitrates continue to spread, drinking water system costs could increase for Tulare Lake Basin and Salinas Valley communities. 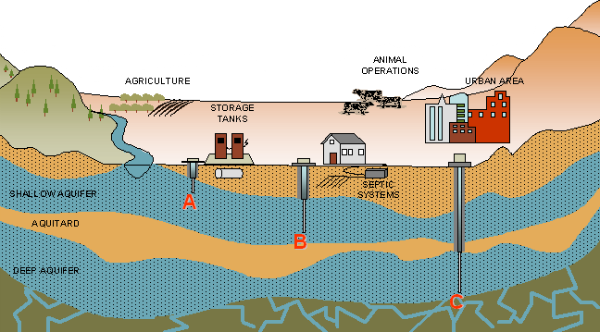 The report found that 10 percent of the 2.6 million people in the Tulare Lake Basin and Salinas Valley rely on groundwater that may exceed the nitrate standard of 45 milligrams per liter set by the California Department of Public Health for public water systems. The problem is likely to worsen for decades . As high nitrate concentrations continue to persist, communities are faced with using expensive treatment and alternatives.

Reducing nitrate in the groundwater is possible, with methods such as improved fertilizer management and water treatment. However, costs range from modest to quite expensive. Directly removing nitrate from large groundwater basins is extremely costly and not technically feasible.

Nitrates and nitrites are nitrogen-oxygen chemical units which combine with various organic and inorganic compounds. The main nitrates are ammonium, sodium, potassium, and calcium salts. Several million kilograms are produced annually for this purpose. The greatest use of nitrates is as a fertilizer. Once taken into the body, nitrates are converted to nitrites. The major sources of nitrates in drinking water are runoff from fertilizer use; leaking from septic tanks, sewage; and erosion of natural deposits.

Infants below six months who drink water containing nitrate in excess of the maximum contaminant level (MCL) could become seriously ill and, if untreated, may die. Symptoms include shortness of breath and blue baby syndrome.

In freshwater or estuarine systems close to land, nitrate can reach high levels that can potentially cause the death of fish. While nitrate is much less toxic than ammonia or nitrite, levels over 30 ppm of nitrate can inhibit growth, impair the immune system and cause stress in some aquatic species. In most cases of excess nitrate concentrations in aquatic systems, the primary source is surface runoff from agricultural or landscaped areas that have received excess nitrate fertilizer. This is called eutrophication and can lead to algae blooms. As well as leading to water anoxia and dead zones, these blooms may cause other changes to ecosystem function, favoring some groups of organisms over others. As a consequence, as nitrate forms a component of total dissolved solids, they are widely used as an indicator of water quality.

Nitrate also is a by-product of septic systems. To be specific, it is a naturally occurring chemical that is left after the breakdown or decomposition of animal or human waste. Water quality may also be affected through ground water resources that have a high number of septic systems in a watershed. Septics leach down into ground water resources or aquifers and supply nearby bodies of water. Lakes that rely on ground water are often affected by nitrification through this process.

If you are concerned about nitrate in a private well, please visit: EPA's private drinking water wells  or Water Systems Council Web site

How could nitrate be removed from drinking water?

The following treatment method(s) have proven to be effective for removing nitrate to below 10 mg/L or 10 ppm: ion exchange, reverse osmosis, electrodialysis.

Blue Baby Syndrome is a medical condition that occurs when the blood can not carry sufficient amount of oxygen throughout the body. Babies are more vulnerable than adults. This condition may be inherited or acquired due to exposure to certain drugs, such as anti biotics, toxic chemicals and nitrates found in drinking water and food.

Blue baby syndrome is caused due to methemoglobinemia, which occurs due to contamination of nitrates in the ground water, accordingly, causing a drop in the oxygen-carrying capacity of hemoglobin in the baby. Groundwater gets contaminated by nitrates that are generated from fertilizers. It can also be linked to certain pesticides (DDT, PCBs etc), which cause eco-toxicological problems in the food chain.

Other conditions reduce the level of oxygen in the blood too, thereby resulting in blue discoloration. A defect in the heart can result in an alteration in the direction of blood from de-oxygenated to oxygenated heart chamber, consequently, causing mixing of the blood.