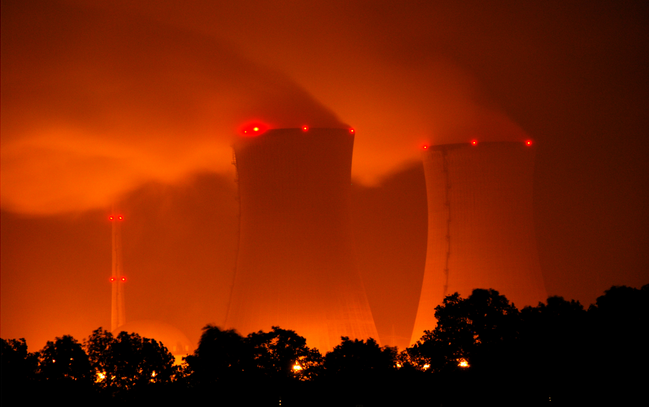 We had 10 different nuclear events reported in just 10 days. Below is a list of them with date and short description.

Doel 3 nuclear reactor at Doel Nuclear Power Station in Belgium was shut down on August 8, 2012 under the suspicion that one of its components might be cracked. “We have found anomalies,” said Karina De Beule, spokesman for the ACFN, the federal agency for nuclear control.

Doel 3 reactor will be shutdown until at least the end of August, but it is possible that the reactor could be shut down for good.

The station is located in the most densely populated area of all nuclear power stations in Europe, with 9 million inhabitants within a radius of 75 kilometres (47 miles). Construction of this plant started in 1969 and commission started in 1975. More info here.

Operators of the Calvert Cliffs nuclear power plant in Southern Maryland have shut down one of the two reactors there because a control rod unexpectedly dropped into the reactor core, causing a reduction in power generation, a plant spokesman said Monday.

The 793-MW unit was shut after a leak was identified Aug. 12. Since July, the NRC has been monitoring a gradual increase of unidentified leakage at the reactor and sought safety assurances from Entergy on those leaks.

Connecticut’s nuclear power plant shut one of two units on Sunday because seawater used to cool down the plant is too warm. More info here.

Palisades is shut down because of a leak of coolant from the control rods. It’s supposedly fixed now but the NRC is bringing in three more inspectors.

One of the two nuclear generators at the Prairie Island plant was shut down because its emergency diesel generators suffered exhaust leaks.

The Monticello nuclear plant’s single generating unit, which had been operating at 10 percent capacity since last weekend, was shut down because of a leaking pipe inside the plant’s concrete containment structure, the company said.

At approximately 14:58 EDT, a portion of the Fermi 2 Integrated Plant Computer System (IPCS) failed. This resulted in a loss of approximately 60 percent of data on the Safety Parameters Display System (SPDS). More info here.

Belgium has halted the 1,008-megawatt Tihange 2 reactor, as it has the same pressure vessel as Doel 3 at Doel Nuclear Power Station.

“I would like to remind that Doel 3 and Tihange 2 have been halted and do not represent any danger for the population, the workers and the environment,” Willy De Roovere, head of the FANC regulator agency.

Tokyo Electric Power Co. discovered possibly highly radioactive water on the first floor of the No. 4 reactor turbine building at its disaster-crippled Fukushima No. 1 nuclear power plant on Tuesday morning. The company believes the water leaked from a pipe that is transferring highly radioactive water from the basement of the No. 3 reactor’s turbine building. More info here.

Fire crews were called to Torness nuclear power station in East Lothian early yesterday after a blaze broke out. The plant’s on-site fire team dealt with the incident, which involved lagging on a pipe catching alight at 12:25am. Managers insisted there was no risk to the public during the incident at the plant, operated by French firm EDF Energy.