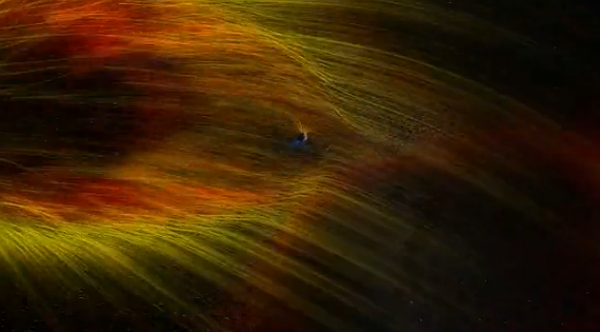 The dramatic science behind the Sun’s powerful coronal mass ejections and their interactions with the Earth’s magnetosphere and climate is now can be viewed now in this newly released video from NASA. In this animation, you can watch as the particles from the solar wind are redirected around the Earth, keeping us safe – and hydrated. This portion showcases the interaction between the Sun’s solar wind and the Earth’s ocean currents. What’s really amazing about this video is that the underlying data visualizations are based on real satellite observations. The swirling ocean currents were created from real ocean current data. (UniverseToday)

This is actually an excerpt from Dynamic Earth: Exploring Earth’s Climate Engine  which is playing at the Smithsonian National Air and Space Museum in Washington, D.C. The video was recently chosen as a “select entry” for the 2012 SIGGRAPH conference, held in Los Angeles on Aug. 5 to 9, 2012.

Dynamic Earth explores the inner workings of Earth’s climate system. With visualizations based on satellite monitoring data and advanced supercomputer simulations, this cutting-edge production follows a trail of energy that flows from the Sun into the interlocking systems that shape our climate: the atmosphere, oceans, and the biosphere. Audiences will ride along on swirling ocean and wind currents, dive into the heart of a monster hurricane, come face-to-face with sharks and gigantic whales, and fly into roiling volcanoes.

Dynamic Earth explores the relationship of Earth and the Sun. The Earth is close enough to the Sun to bask in its warmth, thanks to a series of natural defenses, including its magnetic field. Dynamic Earth is the result of a two-year long collaboration between Spitz Creative Media, the Advanced Visualization Lab at the National Center for Supercomputing Applications (NCSA) at the University of Illinois, NASA’s Scientific Visualization Studio, and Thomas Lucas Productions, Inc. Produced in association with the Denver Museum of Nature & Science and NASA Earth Science. Narrated by Academy-Award nominated actor Liam Neeson.