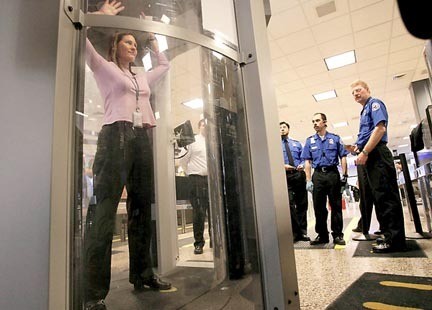 As expected, the Australian Federal Government has just approved the roll-out of compulsory full body scanning for passengers passing through Australia’s international airports. The bill also enables future governments to update the technology (without restriction), and prohibits images or personal information from being stored or transmitted.

Australia’s minister for Transport, Anthony Albanese, has been quoted as saying “The millimetre-wave body scanners are perfectly safe and one body scan is comparable to passive exposure to a mobile phone used several metres away”.

Unfortunately, Mr Albanese is not only wrong, but his statements are also misleading.

There are emerging reports that millimetre-wave body scanners may have the potential to damage human DNA. A study conducted by Boian S. Alexandrov (and colleagues) at the Center for Nonlinear Studies at Los Alamos National Laboratory in New Mexico showed that these terahertz waves could “…unzip double-stranded DNA, creating bubbles in the double strand that could significantly interfere with processes such as gene expression and DNA replication”.

Considering that the minister was quoted as saying “You can get more radiation sitting on a plane than you will going through one of these body scanners”, his statements demonstrate not only his incompetence, but also the carelessness and contempt that the Australian Government has for its citizens and visitors to Australia.

The amendment to the aviation transport security act also includes the ‘exclusion’ of Australian federal police from manning Airports in the Northern Territory. The federal government explains that “the decision is in line with the Government’s aviation security objective of a layered and proportionate response to threats and aligning resources against threat profile” and that “the decision also reflects the fact that Alice Springs Airport does not receive any international flights and its total passenger figures are substantially less than other major airports”. So, therefore, if these so-called “terrorists” were any smart, then a simple Google search (or by reading this article) would provide them with the necessary knowledge to stage an attack from Darwin.

There are also claims that millimetre-wave body scanners don’t even have the capability to detect most common objects and instruments that are ordinarily used in explosive devices. Tests by scientists revealed that millimetre-wave scanners picked up shrapnel and heavy wax and metal, but plastic, chemicals and liquids were missed. It was also revealed that if a material is low density, such as powder, liquid or thin plastic — as well as the passenger’s clothing — the millimetre waves pass through and the object is not shown on screen. (Source: Are airport scanners just a scam? (2010, Jan 04). Belfast Telegraph, pp. 14).

Body scanning technology will not improve the safety of traveling passengers; it will slow down processing times and will impede on the privacy of travellers. To make matters even worse, the technology behind millimetre-wave body scanners is still considered flawed and has not been fully tested. In German trials of the body-scanning technology, false alarms were recorded and sweaty armpits were among the culprits, slowing down departure lanes. Germany ditched the scanners after too many false alarms but they are in use in some parts of Europe and the US. (Hepworth, A. (2012, Apr 24). Sweaty armpits trigger alarm. The Australian, pp. 7)

The resistance from within the aviation industry in Australia has also been growing at a rapid pace. Pilots of Virgin Australia have started to lobby the federal government to “exempt flight and cabin crew from full body scanners because of worries about their efficiency and the long-term health effects of repeated exposure to the devices”. The Virgin Pilot Group (VIPA) has argued that “evidence about low-level radio frequency radiation is not clear-cut, and pilots should have limits on exposure in much the same way health workers do.” They went on to argue that “Over the years there have been reports from laboratories in North America and Europe that have shown biological effects after the exposure of animals and animal tissue to relatively low levels of radio frequency radiation.” (Creedy, S. (2012, May 11). Health fears spark call for pilots to sidestep scanners. The Australian, pp. 36)

Every day our privacy, freedoms and rights are being tested and taken away. The Australian community must stand-up to this Federal ‘Globalist’ Government and not allow the deployment of millimetre-wave body scanners at Australian airports.