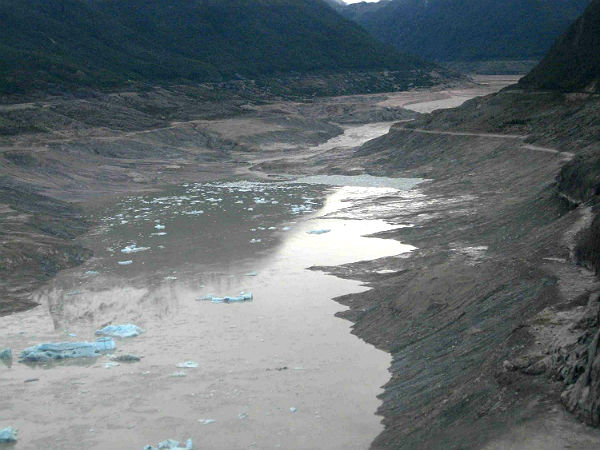 Lake Cachet II in Chile’s southern Patagonia vanished in less than 24 hours, leaving behind just some large puddles and chunks of ice in the vast lake bed. Lake Cachet II’s 200 million cubic liters of water gushed out into the Baker river, tripling its volume and emptying the five square kilometer (two square miles) lake bed. Cachet II has drained 11 times since 2008. The people living beside the Colonia River in the Aysén region of Chilean Patagonia are under constant threat of a sudden catastrophic flood sweeping down from the mountains above them. With trend of rising global temperatures, experts believe this will increase in frequency.

Melting of Colonia Glacier is responsible for lake’s water inflow. It is located in the Northern Patagonian ice field, some 2,000 kilometers (1,250 miles) south of the capital, Santiago. The glacier normally acts as a dam containing the water, but rising temperatures have weakened its wall. Twice this year, on January 27 and March 31, water from the lake bore a tunnel between the rocks and the glacier wall which resulted with disappearing water. In March, the lake dropped 31 meters (90 feet) when the water drained out, according to a report from the General Water Directorate, which monitors lake levels in Chile using satellite data.

There have been 53 similar cases of lakes draining in Chile between 1896 and January 2010, with increased frequency in the later years. The Tempanos Lake, also in far southern Chile, drained in a similar fashion in May 2007. There were ice floes on the floor of the ten square kilometer lake bed, but no water.

This phenomenon is known as GLOFs (Glacial Lake Outburst Floods).

Glacial lake outburst flood (GLOF) is a type of outburst flood that occurs when the dam containing a glacial lake fails. The dam can consist of glacier ice or a terminal moraine. Failure can happen due to erosion, a buildup of water pressure, an avalanche of rock or heavy snow, an earthquake or cryoseism, volcanic eruptions under the ice, or if a large enough portion of a glacier breaks off and massively displaces the waters in a glacial lake at its base.

Climate models predict that as temperatures rise, it will become more frequent. The global climatic change during the first half of the twentieth century has brought a tremendous impact on the high mountainous glacial environment. Many of the big glaciers melted rapidly and gave birth to the origin of a large number of glacier lakes. Due to the faster rate of ice and snow melting, possibly caused by the global warming, the accumulation of water in these lakes has been increasing rapidly and resulting sudden discharge of large volumes of water and debris and causing flooding in the downstream. Glacial lake outburst flood (GLOF) causes disasters to life and property along the downstream, results serious death tolls and destruction of valuable forests, farms and costly mountain infrastructure.

The GLOF phenomenon is not exclusive to Patagonia: it has happened in places like the Himalayas, and in Iceland due to volcanic activities. In a phenomenon also related to rising temperatures, a slab of ice the size of a city block broke off Peru’s Hualcan glacier and slid into a high mountain lake with destructive consequences in April 2010. The crash unleashed a giant wave that breached the lake’s levees, causing a tsunami of mud on a village in the northern province of Carhuaz that destroyed more than 20 homes and leaving some 50 people homeless, according to regional Civil Defense.

According to a 2009 World Bank report, in the last 35 years, Peru’s glaciers have shrunk by 22%, leading to a 12% loss in the amount of fresh water reaching the coast. There are a number of imminent deadly GLOFs situations that have been identified worldwide. The Tsho Rolpa glacier lake in the Rolwaling Valley, about 110 kilometres (68 mi) northeast of Kathmandu, Nepal, is growing larger every year due to the melting and retreat of the Trakarding Glacier, and has become the largest and most dangerous glacier lake in Nepal, with approximately 90 to 100 million m³ (117 to 130 million yd³) of water stored.