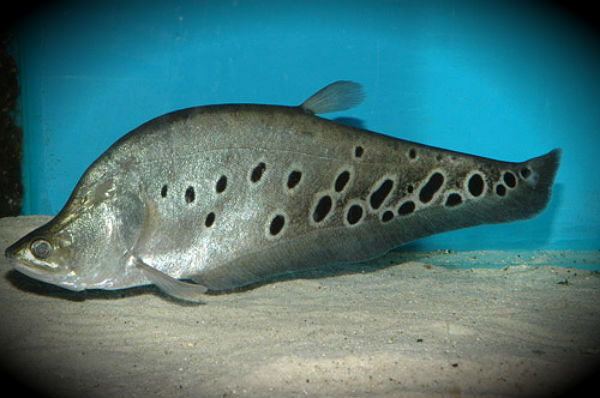 The knife-shaped fish are reported to be multiplying in Laguna Lake where they are displacing the native species, according to Asis Perez, head of the Bureau of Fisheries and Aquatic Resources. The Philippine fisheries chief on Sunday said he had ordered a study into a foreign species called the “knife fish” that was posing a threat to the local fishing industry at the country’s largest lake. Militant fisherfolk group, Pambansang Lakas ng Kilusang Mamamalakaya ng Pilipinas (Pamalakaya) and Save Laguna Lake Movement (SLLM) had sounded the alarm over the invasion of knifefishes in the Laguna de Bai, which endangers the livelihood of small fishermen there.

The fish, which can measure about 51 centimetres (20 inches), was reportedly being bred locally as an ornamental species for aquariums but somehow got into the lake, which is located on the edge of Manila.  Knife fish is an alien specie usually coming from Latin America.  Pamalakaya national chair Fernando Hicap, in a statement said, the new invader will cause much trouble too, since it grows faster and eats other fishes such as bangus (milkfish), tilapia, and big head (Imelda). This appeared to be the latest case of an alien invasive species harming the local environment. In previous years, the suckermouth catfish, known locally as the “janitor fish”, was also introduced to local waters by ornamental fish breeders, where it displaced native species and damaged nets. Knife fish and janitor fish were introduced in the Philippines as ornamental fish. They could have escaped or they could have been intentionally freed.

The Philippines has only recently stepped up its concern over the introduction of alien species to native habitats, which can drive local species to extinction. The country’s numerous porous ports have made it difficult to prevent the introduction of such species. In December, five people were arrested after they were caught with dozens of banned, carnivorous piranha fish they had brought into the country.

During former President Ferdinand E. Marcos’ time, the golden kuhol (escargout) had been introduced to be an alternative food source for farmers. Eventually, the food source had become pests as it consumes young palay (rice plant) as food.

Water hyacinths or commonly known as water lily, are actually, not a country’s native. They were used before as pond decorations but find their way into our major waterways, causing clogging and massive flooding, just like what happened in Mindanao.

On the other hand, irresponsible pet handling and the unregulated importation of alien species for pets and decorations are the said culprits for this invasion. Since most of them get disinterested with their pets, they intend to throw them away and let them proliferate in the wild. (CBCP News)