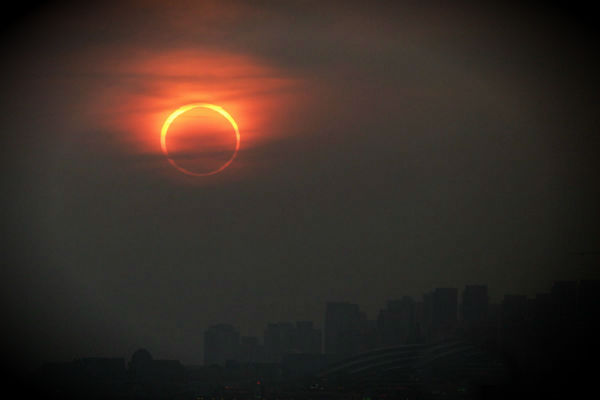 An annular solar eclipse will be visible from a 240 to 300 kilometre-wide track that traverses eastern Asia, the northern Pacific Ocean and the western United States. A partial eclipse is seen within the much broader path of the Moon’s penumbral shadow, that includes much of Asia, the Pacific and the western 2/3 of North America. This is a morning event in Asia on May 21st. The Moon will pass in front of the Sun but because this is not a total eclipse, some portion of the sun will always be exposed. 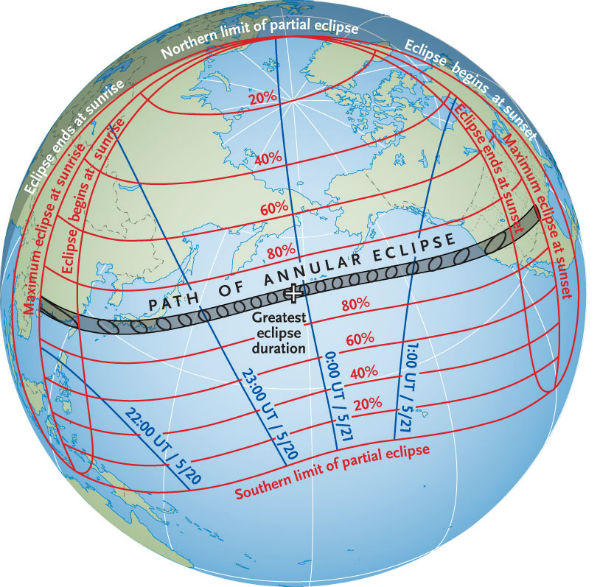 The annular ring is quite thick because the Moon’s apparent diameter is only 94% that of the Sun. The eclipse will be partial outside the narrow center line. Observers almost everywhere west of the Mississippi will see a crescent-shaped sun as the Moon passes by off-center.

The antumbral shadow will travel with a velocity of 1.1 kilometres/second,  leaves Japan. The instant of greatest eclipse  occurs at 23:52:47 UTC when the eclipse magnitude reaches 0.9439. At that instant, the duration of annularity is 5 minutes 46 seconds, the path width is 237 kilometres and the Sun is 61° above the flat horizon formed by the open ocean.

During the course of its 3.5-hour trajectory, the antumbra’s track is approximately 13,600 kilometres long and covers 0.74% of Earth’s surface area. 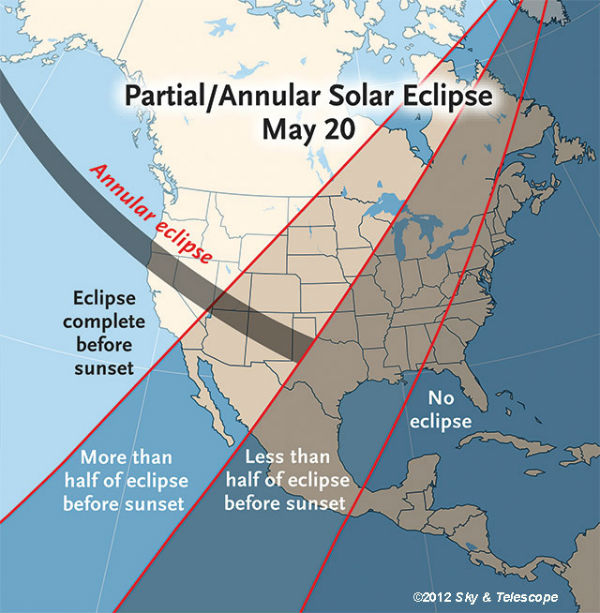 There is an excellent animated map prepared by Larry Koehn of ShadowandSubstance.com and it shows the best times to look.

This solar eclipse goes through a cycle called a Saros. The circumstances of this eclipse repeats itself every 18 years 11 days and 8 hours (and other lunar and solar eclipses do the same thing). This particular Saros started all the way back in the year 984 A.D. The last one in this series will end in the year 2282. So based on this particular Saros, the next one will occur on June 1, 2030 in the eastern hemisphere, and again it will be an annular eclipse of the sun.

Additional details for the 2012 annular solar eclipse (including tables, maps and weather prospects) can be found at: eclipse.gsfc.nasa.gov/SEmono/ASE2012/ASE2012.html

The annular path begins in southern China at 22:06 UT. Because the Moon passed through apogee one day earlier (May 19 at 16:14 UT), its large distance from Earth produces a wide path of annularity. Traveling eastward, the shadow quickly sweeps along the southern coast of Japan as the central line duration of annularity grows from 4.4 to 5.0 minutes. Tokyo lies 10 kilometres north of the central line. For the over 10 million residents within the metropolitan area, the annular phase will last 5 minutes beginning at 22:32 UT (on May 21 local time).

The shadow passes just south of Alaska’s Aleutian Islands as the central track slowly curves to the southeast. After a 7000 kilometre-long ocean voyage lasting nearly 2 hours, the antumbra finally reaches land again along the rugged coastlines of southern Oregon and northern California at 01:23 UTC (May 20 local time).

Redding, CA lies 30 kilometres south of the central line. Nevertheless, it still experiences an annular phase lasting 4 1/2 minutes beginning at 01:26 UT. It is already late afternoon along this section of the eclipse path. The Sun’s altitude is 20° during the annular phase and decreasing as the track heads southeast. Central Nevada, southern Utah, and northern Arizona are all within the annular path.

By the time the antumbra reaches Albuquerque, NM (01:34 UT), the central duration is still 4 1/2 minutes, but the Sun’s altitude has dropped to 5°. As its leading edge reaches the Texas Panhandle, the shadow is now an elongated ellipse extending all the way to Nevada. Seconds later, the antumbra begins its rise back into space above western Texas as the track and the annular eclipse end.

Partial phases of the eclipse are visible primarily from the USA, Canada, the Pacific and East Asia.

The safest way to view this event is to attend a planetarium, observatory or local astronomy club on May 20th. Telescopes and other safe methods will be set up to make your viewing of this celestial event most enjoyable.

To prevent eye damage, use eclipse glasses, a safely-filtered telescope, or a solar projector to observe the eclipse. You can make a handy solar projector by criss-crossing your fingers waffle-style. Rays of light beaming through the gaps will have the same shape as the eclipsed sun. Or look on the ground beneath leafy trees for crescent-shaped sunbeams and rings of light.

Don’t use hospital x-rays for they will not work. I have seen people do this, and again, you run the risk of damaging your eyes.