On May 19, 2012 JST three strong earthquakes struck near the March 11, 2011 magnitude 9.0 Great Tohoku earthquake and they all happened within three hours. For easier understanding of times when they occurred all earthquakes will be described in UTC time. 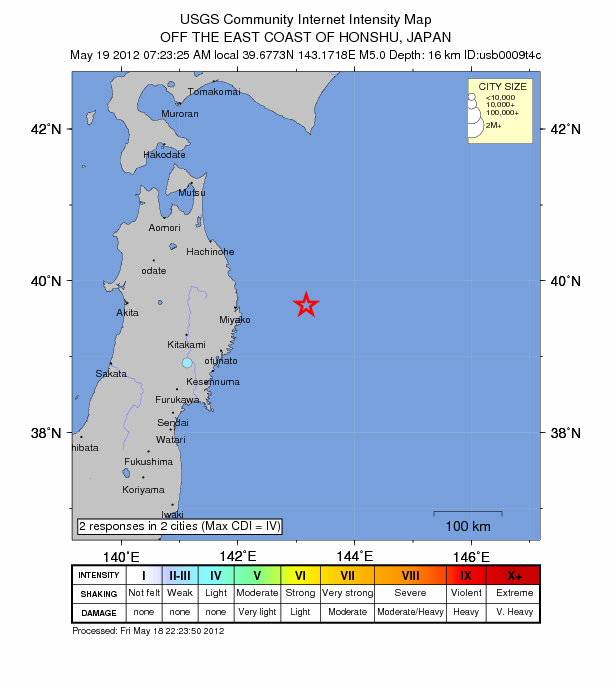 JMA had the same values and recorded: 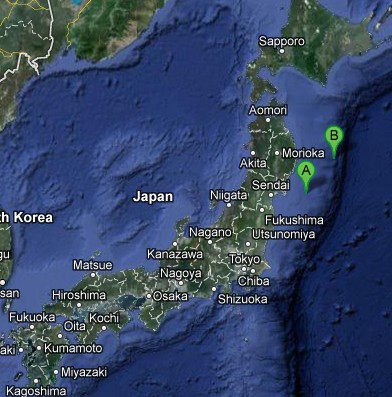 Historical seismicity of the area since 1900, magnitude 7+ 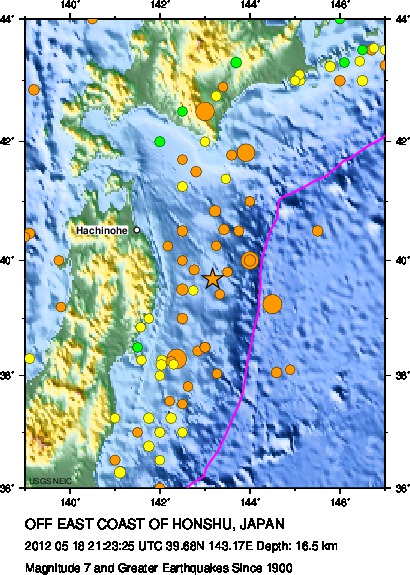 The magnitude 9.0 Tohoku earthquake on March 11, 2011, which occurred near the northeast coast of Honshu, Japan, resulted from thrust faulting on or near the subduction zone plate boundary between the Pacific and North America plates. At the latitude of this earthquake, the Pacific plate moves approximately westwards with respect to the North America plate at a rate of 83 mm/yr, and begins its westward descent beneath Japan at the Japan Trench. Note that some authors divide this region into several microplates that together define the relative motions between the larger Pacific, North America and Eurasia plates; these include the Okhotsk and Amur microplates that are respectively part of North America and Eurasia.

The March 11, 2011 earthquake was an infrequent catastrophe. It far surpassed other earthquakes in the southern Japan Trench of the 20th century, none of which attained M8. A predecessor may have occurred on July 13, 869, when the Sendai area was swept by a large tsunami that Japanese scientists have identified from written records and a sand sheet.

Continuing readjustments of stress and associated aftershocks are expected in the region of this earthquake. The exact location and timing of future aftershocks cannot be specified. Numbers of aftershocks will continue to be highest on and near to fault-segments on which rupture occurred at the time of the main-shock. The frequency of aftershocks will tend to decrease with elapsed time from the time of the main shock, but the general decrease of activity may be punctuated by episodes of higher aftershock activity. The risks of great earthquakes at locations far from northern Honshu are neither significantly higher nor significantly lower than before the March 11 main-shock. (USGS)