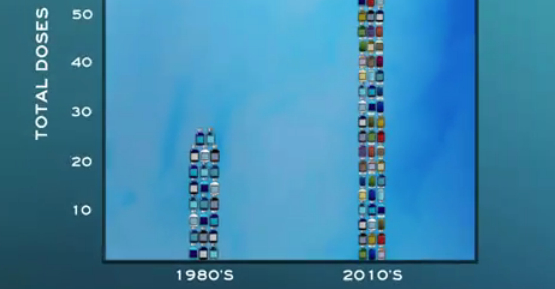 The recently released documentary film “The Greater Good,” by Leslie Manookin, Kendall Nelson and Chris Pilaro about vaccination policy, safety, and history, is a runaway hit, opening to packed houses around the country, after also being aired numerous times on Al Gore’s TV network “Current TV.”

The film follows a few families whose children have been struck down by what they believe to be vaccine related adverse reactions, on one case the death of an infant–in another, the destruction of an entire family, following a teenage girl’s demise after Gardisil shots.

It contrasts these heart-wrenching interviews and scenes with interviews from the head researchers and vaccine advocates from CDC, FDA, pharmaceutical companies, and others, creating not a “balanced” documentary but one with a carefully documented point of view.

The film comes at a critical time in the long standing battle between vaccine or “greater good” advocates and so called anti-vaccers, who are almost entirely parents with children who suffered neuro-toxic reactions following vaccinations. In April, the CDC announced its latest figures, said to be in reality much higher, that 1 in 88 American children are now “born” autistic. But Americans across the nation are rising up and demanding answers to what it is that is making our children so sick.

There is no environmental concern that is more important–none–than the dumping of known neuro-toxins into out children’s bodies.

If you want to help the cause of raising awareness about the truth of vaccines and their effects, please go to www.greatergoodmovie.org/, order a few copies, and/or schedule a screening of the film in your hometown.

Celia Farber is the host of Radio Free Science on Gary Null’s Progressive Radio Network every Friday at 3:00 pm EST.

She has been an investigative science reporter and cultural journalist at many magazines including SPIN, Esquire, Rolling Stone, Harper’s and more. Her critically acclaimed book “Serious Adverse Events: An Uncensored History of AIDS” is available on Amazon.