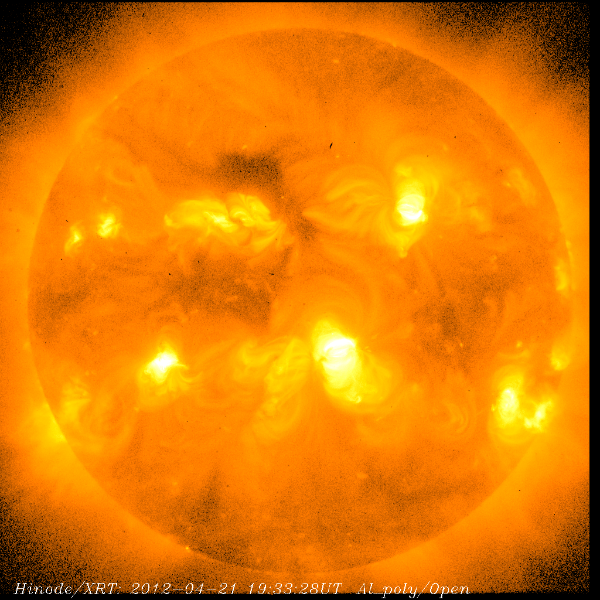 While scientists had predicted that the next flip would begin from May 2013, the solar observation satellite Hinode found that the north pole of the sun had started flipping about a year earlier than expected. There was no noticeable change in the south pole.

The researchers found signs of unusual magnetic changes in the sun. Normally, the sun’s magnetic field flips about once every 11 years. In 2001, the sun’s magnetic north pole, which was in the northern hemisphere, flipped to the south. If that trend continues, magnetic field polarity at the solar poles will reverse and become quadrupolar in May, meaning positive fields will emerge in the North and South poles and negative fields will emerge on the equator, according to the National Astronomical Observatory of Japan and other institutes. A research team led by Saku Tsuneta, a professor at the observatory, analyzed solar magnetic fields data using Hinode, an observational satellite, and confirmed that the polarity of the magnetic field at the North Pole began to reverse in July last year. 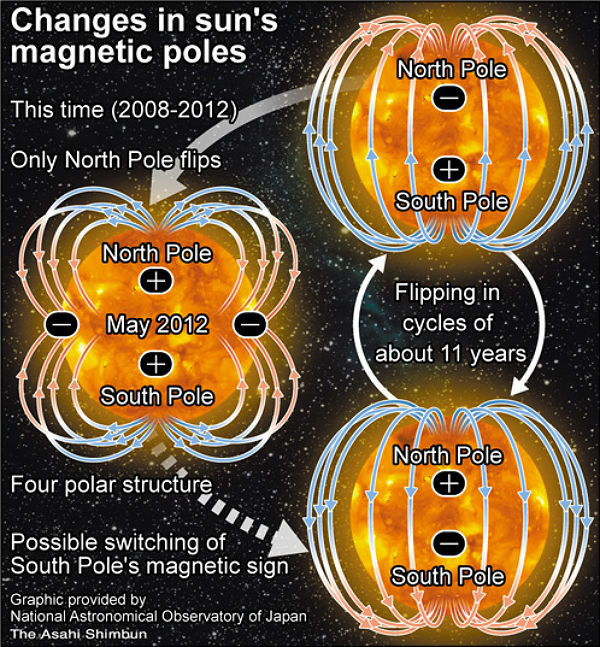 The research team believes the quadrupolar pattern also emerged in the 17th to 18th century. The Japanese study found that the trend of current sunspot activity is similar to records from Maunder Minimum, period about 300 years ago when temperatures are estimated to have been about 2.5 degrees lower than in the second half of the 20th century. Officials of the National Astronomical Observatory of Japan and the Riken research foundation said on April 19 that the activity of sunspots appeared to resemble a 70-year period in the 17th century in which London’s Thames froze over and cherry blossoms bloomed later than usual in Kyoto.

Like Earth, the Sun has a North Pole, a South Pole, and an equator. The poles of the Sun are different in several ways from the areas near the Sun’s equator. About every 11 years, the Sun’s magnetic poles flip – North becomes South and vice versa. This flip happens around the peak of the sunspot cycle, when there are lots of sunspots. Earth’s magnetic poles sometimes flip, too. However, it is usually many thousands or even millions of years between flips of Earth’s field – not just 11 years! The last polar reversal occurred around 750,000 years ago, but it can happen at shorter intervals, depending on prevailing circumstances.  Some researchers think our planet is overdue for another one, but nobody knows exactly when the next reversal might occur. Many scientists, including Einstein, have predicted that another polar shift is close at hand.  Several ancient civilisations have left records predicting global devastation and change.  The Hopi Indian and Mayan calendars have predicted global devastation and an era of change starting in the year 2012.

The ongoing changes are not confined to the space immediately around our star, Hathaway added. The Sun’s magnetic field envelops the entire solar system in a bubble that scientists call the “heliosphere.” The heliosphere extends 50 to 100 astronomical units (AU) beyond the orbit of Pluto. Inside it is the solar system – outside is interstellar space. 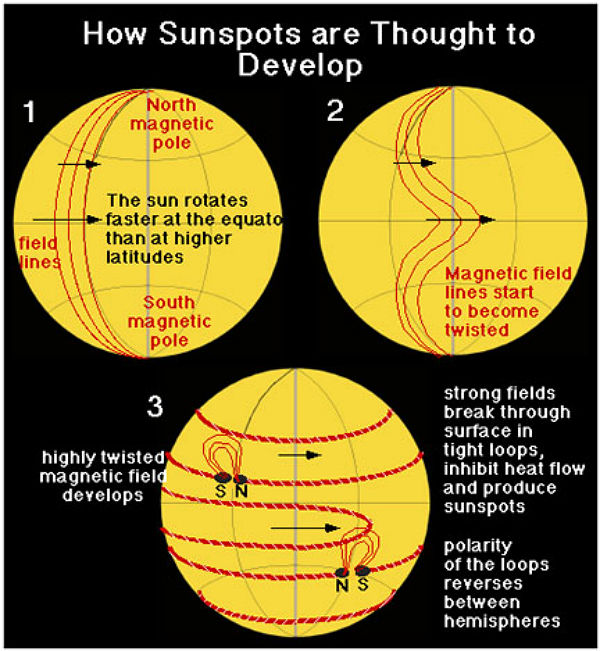 Places where the Sun’s magnetic field is especially strong are called active regions, and often produce telltale sunspots. The local magnetic field in the neighborhood of a large sunspot can be as strong as 4,000 Gauss… much, much greater than the Sun’s average field. Disruptions in magnetic fields near active regions can spawn energetic explosions on the Sun such as solar flares and Coronal Mass Ejections (CME). The degree of complexity of the Sun’s field waxes and wanes over the course of each sunspot cycle.

The exact nature and source of the Sun’s magnetic field are areas of ongoing research. Turbulent motions of charged plasmas in the Sun’s convective zone clearly play a role. Some of the Sun’s magnetism may even be a remnant from the primordial cloud from which the Sun formed. Some of the spectacular structures seen in the solar atmosphere, such as solar prominences and coronal loops, are fantastic visible indicators of material flowing along magnetic field lines which arc thousands of kilometers above the Sun’s surface.

Hinode project is exploring the magnetic fields of the Sun, and is improving our understanding of the mechanisms that power the solar atmosphere and drive solar eruptions.  Solar-B, now named Hinode (Sunrise), was successfully launched from Japan’s Uchinoura Space Center. (Click HERE for RealVideo or HERE for Windows Media) 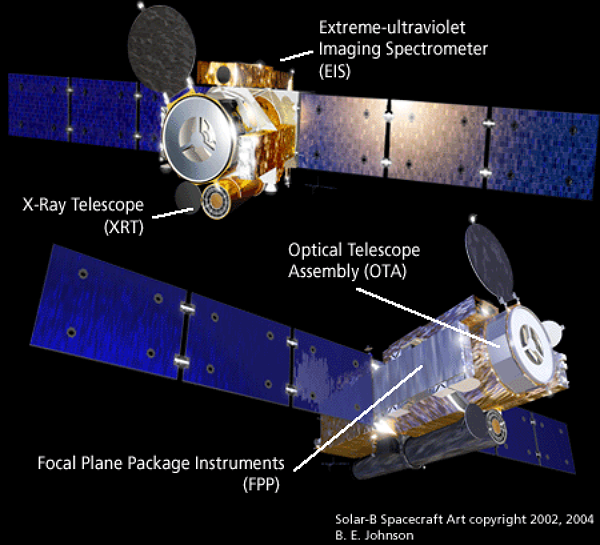 The Hinode mission is a follow-on to the highly successful Japan/US/UK Yohkoh (Solar-A) satellite which operated between 1991 and 2001. Led by the Japanese Aerospace Exploration Agency’s (JAXA) Space Science Research Division (formerly the Institute of Space and Astronautical Science (ISAS)), Hinode consists of a coordinated set of optical, EUV, and X-ray instruments that will investigate the interaction between the Sun’s magnetic field and its corona. The result will be an improved understanding of the mechanisms that power the solar atmosphere and drive solar eruptions. This information will tell us much about how the Sun generates magnetic disturbances and high-energy particle storms that propagate from the Sun to the Earth and beyond; in this sense, Hinode will help us predict “space weather.”

The stability of the Earth’s rotation is especially vulnerable since it already spins at an angle of over twenty-three degrees off centre, and has a lopsided distribution of weight across its surface. The concentration of weight lies mostly along the major land masses of the Americas, Europe and Africa. On the other side of the Earth is the Pacific Ocean, which is Earth’s greatest water mass and much less dense.  This uneven weight distribution compounds the stability issue of the Earth.  The uneven distribution of weight has been further exacerbated by global warming.  The poles have been melting and adding water to the oceans. Additionally galactic alignment will occur in 2012; the sun will be aligned to the ecliptic plane of the Milky Way.