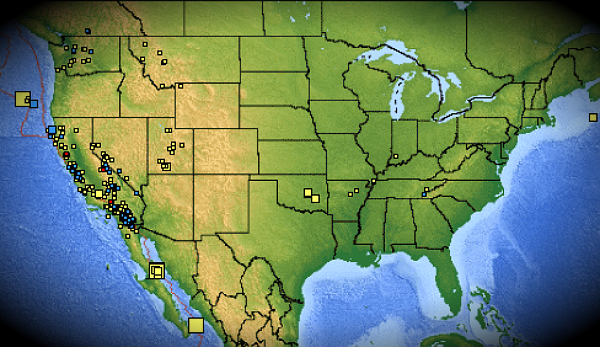 USGS scientists have been investigating the recent increase in the number of magnitude 3 and greater earthquakes in the midcontinent of the United States. These earthquakes are fairly small – large enough to have been felt by many people, yet small enough to rarely have caused damage. Scientists used ultra-sensitive quake-sensing technology to track mid-western tremors and watched the number of quakes jump from a steady background of 20 tremors a year to 50 in 2009, 87 in 2010 and a whopping 134 last year. Clearly, something strange was going on. 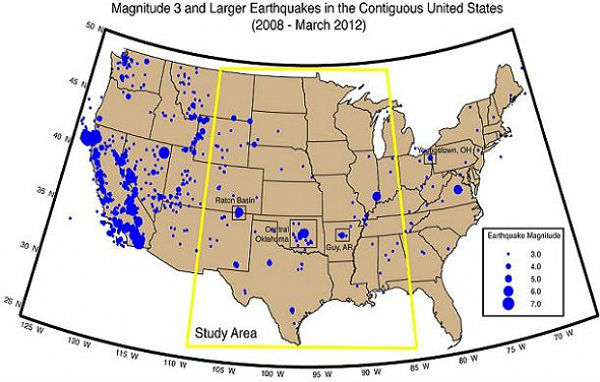 The modest increase that began in 2001 is due to increased seismicity in the coal bed methane field of the Raton Basin along the Colorado-New Mexico border west of Trinidad, CO. The acceleration in activity that began in 2009 appears to involve a combination of source regions of oil and gas production, including the Guy, Arkansas region, and in central and southern Oklahoma. Oklahoma experienced the largest earthquake in the state history on Nov. of 2011, the quake measured 5.6 on the Richter scale and hit outside of Oklahoma City.  An LA Times article suggested fracking could have been the cause.

The nation’s midsection is typically quiet, geologically speaking. The thick basement rock underlying the U.S. Midwest is full of faults, just like basement rock everywhere. But earthquakes only happen when something changes the stress regime enough to unlock those faults. In quake-prone places such as California and Japan, the edges of tectonic plates are shoving past each other. Near active volcanoes, magma presses on the rocks as it pushes its way up from below.

Man-made earthquakes are real, they are proliferating across the U.S. Midwest, and the oil and gas industry is “almost certainly” responsible.

A naturally-occurring rate change of this magnitude is unprecedented outside of volcanic settings or in the absence of a main shock, of which there were neither in the region. That is why USGS team conclude that the startling increase is “almost certainly man-made.

Gas drilling is on the rise around the country, especially hydraulic fracturing. Hydrofracking uses billions of gallons of water a year to crack deep rock and release natural gas. Some have suspected that fracking was causing quakes, but evidence in several parts of the country points to wastewater wells, where companies dump used frack water. The culprit of earthquakes near fracking sites is not believed to be the act of drilling and fracturing the shale itself, but rather the disposal wells.

Hydraulic frac­tur­ing or “frack­ing” is a tech­nol­ogy used to extract nat­ural gas that lies within a shale rock for­ma­tion thou­sands of feet beneath the earth’s surface. Com­bined with another tech­nique called “hor­i­zon­tal drilling,” nat­ural gas com­pa­nies are able to drill for pre­vi­ously untapped reserves. Hor­i­zon­tal drilling allows one sur­face well to tap gas trapped over hun­dreds of acres. Once the con­ven­tional ver­ti­cle drill hits the shale for­ma­tion, it turns hor­i­zon­tally in sev­eral direc­tions. The well is then cased with steel and cement. Explo­sives are places at inter­vals along the hor­i­zon­tal sec­tion of the well to per­fo­rate the steel cas­ing. Under very high pres­sure, a com­bi­na­tion of water, sand and chem­i­cals is sent deep into the earth to cre­ate cracks and fis­sures in the shale rock. Those fis­sures are held open by the sand, allow­ing the natural gas to flow through those cracks, into the well bore and up to the surface. 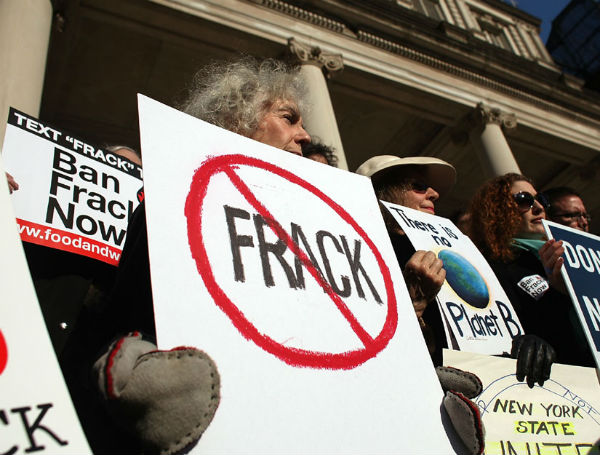 Indus­try says the process is safe and does not pol­lute drink­ing water sup­plies. But a grow­ing move­ment of envi­ron­men­tal­ists, sci­en­tists and res­i­dents worry that the chem­i­cals used in the frack­ing process will leak into aquifers. Waste­water from the process returns to the sur­face con­t­a­m­i­nated with some of those chem­i­cals, as well as buried salts and nat­u­rally occur­ring radioac­tive mate­r­ial. That waste­water needs to be treated, or buried in con­tain­ment wells.

Click here for explanation of the hydraulic frac­tur­ing process

USGS’s studies do not claim that hydraulic fracturing causes the increased rate of earthquakes. USGS’s scientists have found, however, that at some locations the increase in seismicity coincides with the injection of wastewater in deep disposal wells. While it appears likely that the observed seismicity rate changes in the middle part of the United States in recent years are manmade, it remains to be determined if they are related to either changes in production methodologies or to the rate of oil and gas production. Fracking has been linked to everything from polluted water to earthquakes, but the rush toward developing the practice hasn’t slowed much. 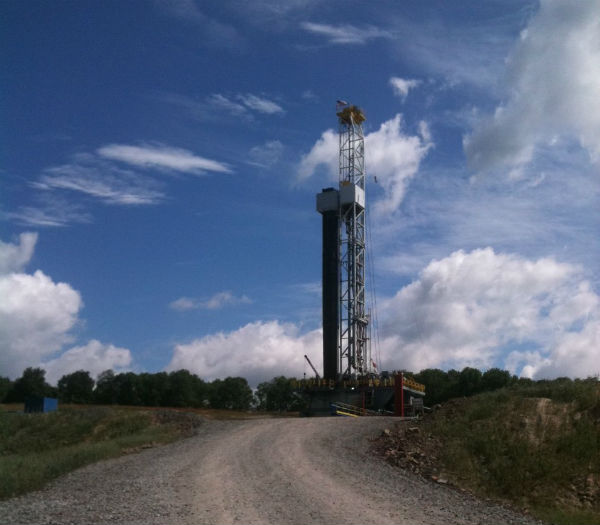 The fact that the disposal (injection) of wastewater produced while extracting resources has the potential to cause earthquakes has long been known. Wastewater is a byproduct of oil and natural gas production from tight shale formations and coal beds. Generally, wastewater produced from many oil and gas production wells within a field may be injected through a single or just a few disposal wells. Waste wells are often deeper than gas drilling wells, down into basement rock where faults are more common. The high water pressure basically separates a fault that has locked in place; the fault moves and creates a quake.

There are more than 50,000 disposal wells in Texas servicing more than 216,000 active drilling wells, according to the Railroad Commission. Each well uses about 4.5 million gallons of chemical-laced water, according to hydraulicfracturing.com.

In preliminary findings, scientists cite a series of examples for which an uptick in seismic activity is observed in areas where the disposal of wastewater through deep-well injection increased significantly. These areas tend to be in the middle of the country – mostly in Colorado, Texas, Arkansas, Oklahoma and Ohio.

One of the earliest documented case histories with a scientific consensus of wastewater inducing earthquakes, is at the Rocky Mountain Arsenal well, near Denver. There, a large volume of wastewater was injected from 1962-1966, inducing a series of earthquakes (below magnitude 5).

Environmentalists have repeatedly pressed regulators to compel oil and gas companies to report what chemicals they use in the drilling and fracking process. Drilling companies add these chemicals to perform particular functions (for example, to prevent corrosion or give the fluid the right consistency), or leave them in because they’re too expensive to remove. According to a 2011 congressional report, many of the chemicals used can pose a serious health risk. No one knows the exact makeup of the frack mixture, drilling muds and other stuff used at well sites (which change from well to well), but this list breaks down the main ingredients revealed so far. A full list of chemicals can be found at fracfocus.org, a website dedicated to chemical disclosure. (Find out more here)

“And as long as I’m president, we’re going to keep on encouraging oil development and infrastructure, and we’re going to do it in a way that protects the health and safety of the American people,”  Barack Obama

Areas of west Texas and eastern New Mexico are experiencing a new energy rush, with prosperity spilling far beyond the oil fields. Fracking requires huge quantities of water, which is hard to come by in the desert. If fracking continues expanding, water experts say aquifers in the desert area could run dry. And that’s just one among the litany of concerns.

The Earth’s crust is pervasively fractured at depth by faults. These faults can sustain high stresses without slipping because natural “tectonic” stress and the weight of the overlying rock pushes the opposing sides of the fault together, increasing the frictional resistance to fault slip. The injected wastewater in deep wells can counteract the frictional forces on faults, causing an earthquake.