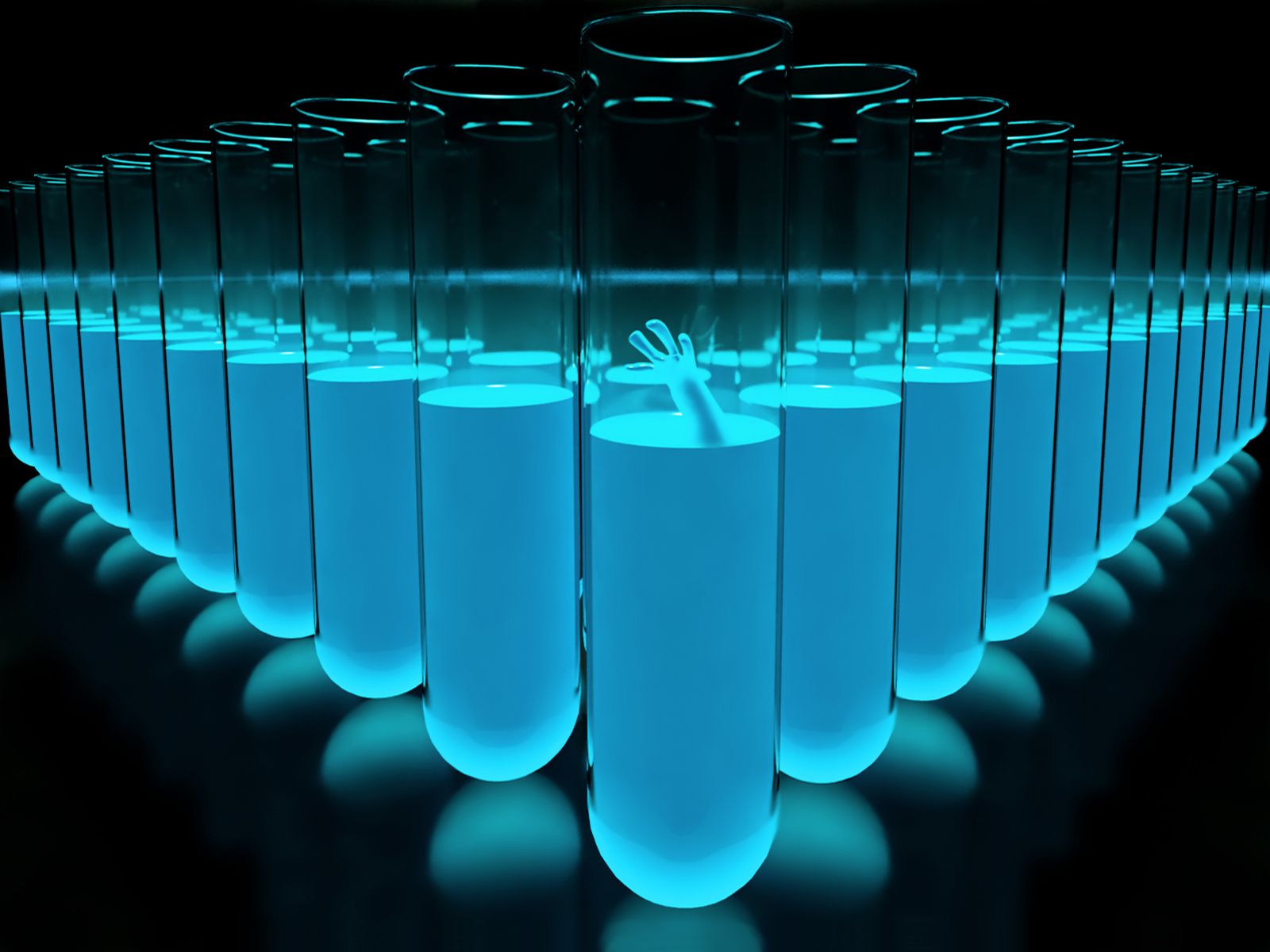 I’m not sure which is the more offensive way to create meat. There’s the current “factory farm” method where masses of hormone-jacked, antibiotics-injected cows are kept confined in what can only be called bovine concentration camps while they’re fed genetically modified corn, then slaughtered without compassion and subjected to diabolical meat-harvesting machinery that turns a cow carcass into corporate profits. On the other hand, there’s the new method being touted across the media: Test tube hamburgers made from thin strips of meat grown in a nutrient vat laced with bovine fetus stem cells. Yumm!

The test tube meat strips actually pulsate and twitch during their laboratory growth phase, by the way, and they’re ultimately ground up with strips of test tube fat grown in a similar way to produce a fatty hamburger-like substance. This has been accomplished by Professor Mark Post of Maastricht University in the Netherlands, who announced his team’s results at the American Academy for the Advancement of Science (AAAS) yesterday.

Test tube meat is here to save the world!

“In October we are going to provide a proof of concept showing out of stem cells we can make a product that looks, feels and hopefully tastes like meat,” says Mark Post at the announcement (http://www.telegraph.co.uk/science/science-news/9091628/Test-tube-ham…). Of course, what does processed meat actually taste like anyway? MSG, sodium nitrite and processed salt, for the most part. So making lab-grown meat taste like today’s factory-processed meat only requires the injection of a few additives into the growth culture. Imagine growing meat patties with MSG inside every cell!

Creating one hamburger will require 3,000 strips of meat, each just half a millimeter thick and grown in laboratory vats. Unlike a cow, which requires roughly two years to grow to the point of slaughter, a test tube burger can be produced in just six weeks.

The “benefits” of test tube hamburger production are being touted as substantial, including:

• More efficient conversion of plants to meat.
• Less environmental damage.
• More humane than killing animals.
• Is the only feasible way to feed more meat to the world.

Of course, they also said that GMOs would “feed the world.” Bill Gates calls genetically modified foods “high-tech agriculture” now, with the strong implication that technology is always superior to Mother Nature (http://tv.naturalnews.com/v.asp?v=1EE22C52BA26FA296CFC8A0361571555). But I’m not so sure about that. In fact, this whole thing sounds more than a little creepy to me.

Test tube meat to feed the masses? Gee, what could possibly go wrong?

I’m skeptical any time technology claims to out-perform nature. Look what they’ve done with GMOs, chemical pesticides, vaccines, or nuclear power. In almost every case where “scientific progress” is touted as the solution for humankind, it ends up creating a nightmare that’s far worse than the problem it was trying to solve.

For the record, I choose not to eat cow meat. I’m not a vegetarian, but I’ve been around lots of cows on farms, and I see cows as conscious, aware mammals who have memories, emotions, families and social structure. They are every bit as intelligent as horses, and most people would cringe at the idea of eating a horse burger.

However, in a survival situation, I would have no hesitation eating grass-fed beef if it were from a healthy farm source. In fact, my personal supply of preparedness foods consists of several bags of USDA organic grass-fed beef jerky made without MSG or sodium nitrite.

But when it comes to growing hamburgers out of stem cells in a petri dish, the whole thing just smacks a little too much of soylent green. How are we to know what they really put in the nutrient solution? Maybe it contains growth hormones to speed production. Maybe it’s loaded with synthetic chemical vitamins instead of natural vitamins. Maybe it’s contaminated with Prozac or fluoride to make us all feel happy and oblivious while we eat synthetic meat. How are we to know what they do with it?

And then, of course, it’s only a matter of time before they start to genetically modify the test tube meat, perhaps using selected genes from the human genetic code to make the end product is more compatible with human biology while avoiding any risk of allergies. So then what do we have? Hybrid bovine / human meat.

…and a world full of cannibals who are eating something that’s partially human flesh.

See, modern science has already proven itself to be a pathetic collection of truly insane megalomaniacs who will gladly splice the genes of animals and insects into crops so that they can create vaccine crops, or vaccine-carrying mosquitoes, or goats that produce spider silk, or some other kind of monstrosity that serves the power-tripping globalists.

And the marvel of modern-day fast food has already proven that people will eat anything marketed to them as food. Case in point? Chicken McNuggets. That’s a hodge podge of industrial chemicals and so-called mechanically-separated chicken, which itself is a meat processing freak show. (http://www.naturalnews.com/032820_Chicken_McNuggets_ingredients.html)

So I guess if you set up a test tube meat lab, splice together a bunch of genes from various species (humans, cows, dogs, insects, ogres, possums and Janet Napolitano) and then grow a vat of some sort of convulsing fibrous tissue that can be made into a 99-cent hamburger, then the great masses will eat it! Who cares what the tissues are floating in, right? As long as it’s offered with a combo meal that includes French fries and an aspartame-laced Diet Coke, people will chug it straight down while watching NBA games and declaring, “We’re winning!”

No doubt test tube hamburger makers will tout their meat as being “Cruelty Free” by saying “No animals were killed in the harvesting of this meat.” Maybe not, but how many humans will be killed in the consumption of it?

By the way, this whole freak show of artificial meat production is being financed by an “…anonymous and extremely wealthy benefactor who Prof Post claims is a household name with a reputation for ‘turning everything into gold’.”

I wouldn’t be surprised at all to learn that Bill Gates was behind it — or someone similarly motivated by a global depopulation agenda.

Bottom line: Artificial meat may be an extraordinary idea, but given the total lack of ethics found in the scientific community today, I wouldn’t trust these people any farther than I could hurl a cow chip.