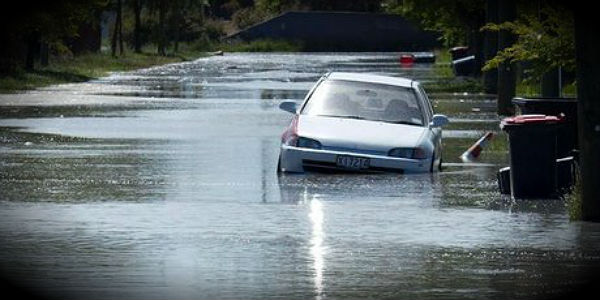 More than tweny aftershocks hit the city of Christchurch and his suburbs since a major aftershocks measuring 5.8 and 5.9 magnitude were the largest since many months. More aftershocks are expected to happen the coming hours, days and even weeks. 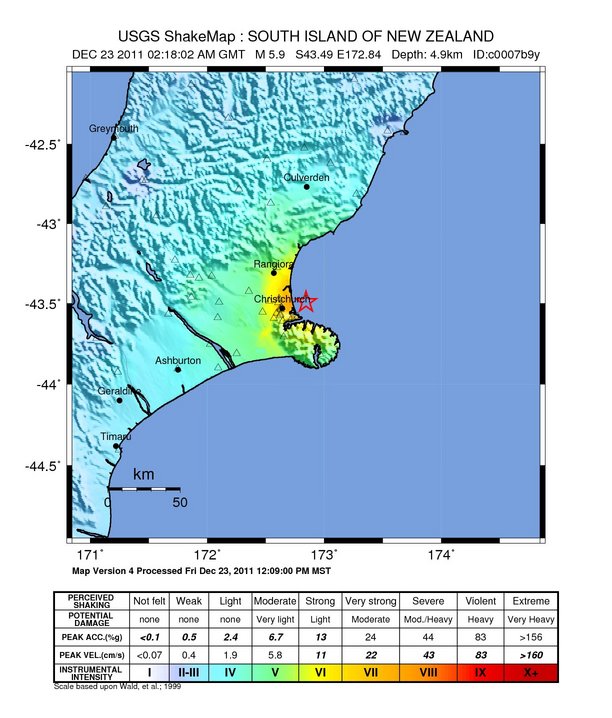 The first stronger quake – magnitude 5.8 quake was located  8km deep and centred 20km north east of Lyttelton – struck at 1.58pm, GeoNet said. It was followed by a magnitude 5.3 quake at 2.06pm, a magnitude 6.0 quake – the largest – at 3.18pm and a 5.0, just 10 km deep, at 4.50pm. It looks like the current epicenter can be called “little out of range” of the other powerful earthquakes reports EarthquakeReport. The epicenter of the initial quake who triggered the other ones was was located a little out of the coast. Hopefully this will not start off a new episode of aftershocks. One of the stronger aftershocks, M5.1 below the Akaroa peninsula occur today, located 10 km east of Akaroa and 50 km south-east of Christchurch at depth of 9 km. GeoNet said there was about a one-in-two chance of a magnitude 5.5 to 5.9 quake and about a one-in-seven chance of a magnitude 6.0 to 6.4.  Aftershocks were likely to continue for days or longer as the ground readjusted to its new state.

Last year, Christchurch was rocked by a series of earthquakes on Boxing Day, with more than two dozen recorded. A 4.9-magnitude quake at 10.30am was the 17th most powerful since the damaging 7.1 quake on September 4. The earthquake that caused the most damage hit on February 22, killing 182 people.

Liquefaction has been reported in the eastern suburbs. (video,  video) Land and rockslides have caused problems on some roads in the vicinity of Christchurch, with biggest damage in Redcliffs. A stopbank on New Brighton Road had also collapsed, and there were reports of major holes on Broadhaven Ave and liquefaction in Avonside. There are large deposits of liquefaction in Bexley, in the area between the Avon River and Anzac Drive, and around Horseshoe Lake , Drake Street, Sinclair Street and Brighton Road, Waygreen Avenue, Terrelle Street, Willryan and Rebecca avenues, Belair Close, Vivian Street, Rockwood Avenue, Tedder Avenue and Endeavour Street, Pinewood, Flemington, Ascot and Bower avenues  and Crofts Lane. Pegasus Avenue and  Branksome Place have suffered major liquefaction and sewage leaks. People are urged to stay away from hill suburbs because of risk of rockfalls. 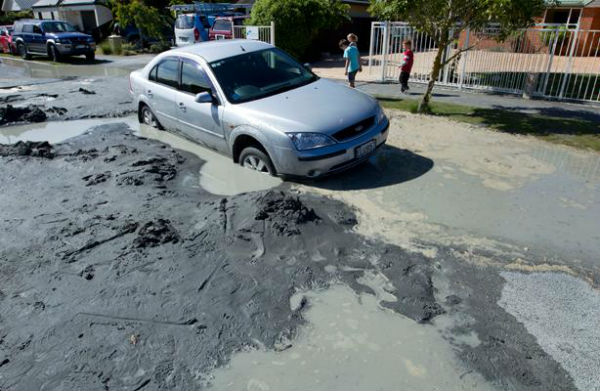 Quake-weary residents in Christchurch’s eastern suburbs were again flooded with silt from liquefaction just two days from Christmas. Flooding covered streets and homes in suburbs already devastated by the September and February earthquakes, including Bexley, Avonside, Parklands and Wainoni. Major potholes appeared on Broadhaven Ave near Waimairi Beach and traffic lights were out in the eastern suburbs. Civil Defence said the situation in the city was similar to the magnitude 6 quake in June in terms of damage and liquefaction.

Liquefaction occurs when waterlogged sediments are agitated by seismic shaking. This separates the grains from each other, reducing their load bearing capacity. Buildings and other structures can sink down into the ground or tilt over, whilst underground pipes and tanks may rise up to the surface. When the vibrations stop the sediments settle down again, squeezing groundwater out of fissures and holes in the ground to cause flooding. The aftermath of liquefaction can leave large areas covered in a deep layer of mud. 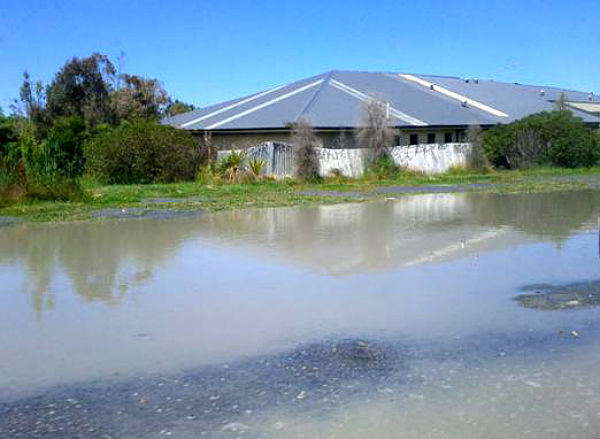 Meanwhile, Civil Defence advised that sewage had flowed into the Avon River and people were asked to keep away from the waterway and estuary for 48 hours. The chief medical officer of health was not asking people to boil water at this stage according to stuff.co.nz. Christchurch City Council had reported some sewage discharge to the Heathcote estuary, and members of the public were advised to avoid contact with the water in the area for the 48 hours following the last significant aftershock

The people of Christchurch had shown great resilience and their human spirit was indomitable.

A fault net below Pegasus Bay is responsible for the large earthquakes shaking Christchurch more than six months after the last significant events. The area of active faulting about 10km off the New Brighton coast and further afield was identified in an undersea survey by the National Institute of Water and Atmospheric Research before the June 13 quakes. GeoNet project manager Ken Gledhill said it appeared thrust movement on two adjacent offshore faults generated yesterday’s 1.58pm 10km-deep magnitude 5.8 quake and the 6km-deep magnitude 6.0 shake at 3.18pm. Preliminary analysis indicated the small faults were oriented approximately north-south, quite a different direction to the Port Hills and Greendale faults. 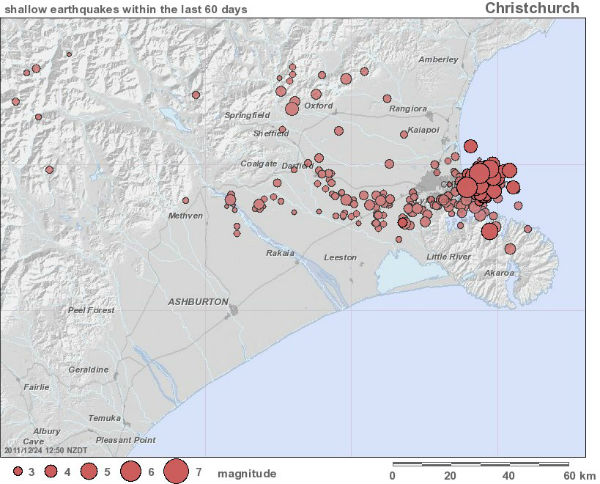 New Zealand is part of a continent called Zealandia, most of which is under the ocean. The country lies across two moving plates – segments of the earth’s crust. As these plates collide, rocks are being pushed up, creating hills and mountains, including the Southern Alps.

Featured image: A car is swamped by flooding caused by liquefaction in the suburb of New Brighton after a series of earthquakes that struck Christchurch. (Credit: Simon Baker)