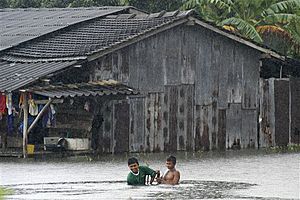 Thailand’s worst floods in more than half a century are threatening to swamp the capital, Bangkok, as early as next week after reaching a “crisis level,” Prime Minister Yingluck Shinawatra said.

At least 253 people have been killed as a result of the seasonal monsoon rains that have hit the country since July 25, the Department of Disaster Prevention and Mitigation said on its website yesterday. About 30 of Thailand’s 77 provinces remain underwater, the agency said.

“This will have a direct impact on Bangkok,” Yingluck said Oct. 7 in a nationally televised address. “We have to admit that this is more serious than in the past.”

As many as 7 billion cubic meters of water is flowing toward Bangkok from Thailand’s northern provinces, the prime minister said, threatening to overwhelm flood defenses on the Chao Phraya river that runs through the capital

The authorities are installing as many as 400 water pumps along the river and digging seven canals on the outskirts of the capital, the Associated Press cited Yingluck as saying in a radio message yesterday.

Nationwide losses from this year’s floods may reach 130 billion baht and reduce economic growth by as much as 1.3 percentage points, the University of the Thai Chamber of Commerce, a private institution established by the chamber, said on Oct. 6.

The government estimates the most recent floods have already caused as much as 30 billion baht of damage, Deputy Prime Minister Kittiratt Na-Ranong said on Oct. 5, describing the deluge as “the worst in 50 or 60 years.”

The disaster has affected more than six million people in Southeast Asia and claimed a further 224 lives in Cambodia, Vietnam and the Philippines, according to the United Nations. Thailand has seen the most fatalities as typhoons and above- average rainfall damage crops, destroy businesses and uproot families.