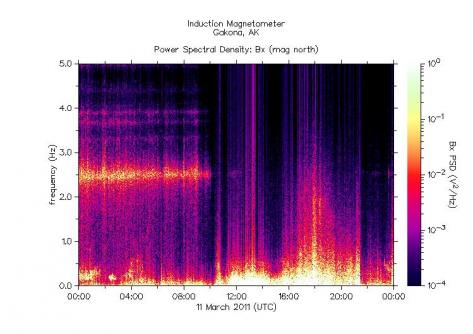 Recent data released by Dimitar Ouzounov and colleagues from the NASA Goddard Space Flight Center in Maryland highlights some strange atmospheric anomalies over Japan just days before the massive earthquake and tsunami struck on March 11. Seemingly inexplicable and rapid heating of the ionosphere directly above the epicenter reached a maximum only three days prior to the quake, according to satellite observations, suggesting that directed energy emitted from transmitters used in the High Frequency Active Auroral Research Program (HAARP) may have been responsible for inducing the quake.

Published in the Massachusetts Institute of Technology (MIT) publicationTechnology Review, the findings are presented alongside a different theory called Lithosphere-Atmosphere-Ionosphere Coupling, which hypothesizes that the heating in the ionosphere may have been caused by the impending earthquake as the fault line released radioactive radon. This theory, of course, is not actually proven, but is instead presented as a possible explanation for the presence of the high-density electrons and emitted infrared radiation that was observed.

Another explanation for this strange heating — and one that, upon analysis, seems much more likely — is that it was an indication that concentrated energy was used to induce the earthquake, and not the other way around. Numerous credible reports and scientific observations reveal that HAARP technology is fully capable of being used as a scalar weapon, meaning it can emit strong electromagnetic pulse bombs that can alter weather or trigger seismic fault lines.

Evidence that HAARP is not only capable of inducing earthquakes, but that it appears to have been used on Japan

A casual glance at the graphics presented as part of Ouzounov’s research data shows near-perfect heat rings present above the epicenter of the quake. If radon emissions from the fault line were truly responsible for creating these heat zones, they would more than likely have had irregular, scattered appearances, rather than concentric circles. This anomaly by itself debunks the theory that the impending earthquake caused the heat patterns.

Also, readings from the HAARP Induction Magnetometer, which visualizes the frequency spectrum of signals detected in the earth’s geomagnetic field, show that a steady, ultra-low frequency (ULF) of roughly 2.5 Hz was being broadcast days before the earthquake. The 2.5 Hz ULF happens to be the exact same frequency as the natural resonance produced by an earthquake — and since there were no constant earthquakes occurring on the days before the quake as the HAARP Induction Magnetometer appeared to indicate, the logical conclusion is that the signal was being broadcast to induce the quake (http://presscore.ca/2011/?p=1624).

Some would argue that HAARP is not capable of producing such frequencies, especially at the power levels that would be required to induce a massive earthquake like the 9.0+ that occurred in Japan. But testimony by various governments says otherwise.

On April 28, 1997, then US Secretary of Defense William S. Cohen gave an important keynote address at the Conference on Terrorism, Weapons of Mass Destruction, and US Strategy at the University of Georgia in Athens. When asked a question about terrorism, Cohen had this to say as part of his response about the type of technology that existed, even back then:

“Others are engaging even in an eco-type terrorism whereby they can alter the climate, set off earthquakes, volcanoes remotely through the use of electromagnetic waves” (http://www.defense.gov/transcripts/…).

This admission counters the claims made by some that no such technology exists, and that it is impossible to create seismic activity using directed energy. Clearly the technology has been around for a while, and the notion of it being used as a weapon is anythingbuta baseless conspiracy theory.

Then, there is the EU report on the environment, security and foreign policy, that was released on January 14, 1999 (http://www.europarl.europa.eu/sides…). This report outlines various types of weapon threats, including a section entitled, “HAARP – a weapons system which disrupts the climate.”

The paper explains that HAARP is “run jointly by the US Air Force and Navy,” and that one of its purposes is “to heat up portions of ionosphere with powerful radio beams.” It also states the following important details:

“HAARP can be used for many purposes. Enormous quantities of energy can be controlled by manipulating the electrical characteristics of the atmosphere. If used as a military weapon this can have a devastating impact on an enemy. HAARP can deliver millions of times more energy to a given area than any other conventional transmitter. The energy can also be aimed at a moving target which should constitute a potential anti-missile system.”

Later references to HAARP describe it as “a matter of global concern,” emphasizing that most people have no idea it even exists. This was written, of course, more than a decade ago — and yet not much has changed since that time, despite several pushes to make HAARP more transparent. But if HAARP is truly responsible for helping to induce some of the seemingly natural disasters that occur in the world, it is no surprise that the program continues to be kept largely under wraps.

You can view the HAARP Fluxgate Magnetometer for yourself at the following link:
http://maestro.haarp.alaska.edu/cgi…