The recent outbreak of an E. coli infection in Germany has resulted in serious concerns about the potential appearance of a new deadly strain of bacteria. In response to this situation, and immediately after the reports of deaths, the University Medical Centre Hamburg-Eppendorf and BGI-Shenzhen began working together to sequence the bacterium and assess its human health risk. BGI-Shenzhen has just completed the sequence and carried out a preliminary analysis that shows the current infection is caused by an entirely new super-toxic E. coli strain.

According to the latest announcement from German health officials, the death toll in Europe from the epidemic has risen to at least 17. Over 1,000 new cases of infection have also been reported in other parts of Europe, including Sweden, Denmark, the Netherlands, the UK, and others. The University Medical Center Hamburg-Eppendorf received the majority of the infected patients from northern Germany and found that antibiotic treatment was ineffective.

BGI was informed of the dangerous situation and, in collaboration with the University Medical Center Hamburg-Eppendorf researchers, used their genomic technology to determine the infectious strain, reveal the mechanisms of infection, and facilitate the development of measures to control the spread of this epidemic.

Upon receiving the bacterial DNA samples, BGI finished sequencing the genome of the bacterium within three days using their third-generation sequencing platform — Ion Torrent by Life Technologies. Bioinformatics analysis revealed that this E. coli is a new strain of bacteria that is highly infectious and toxic.

According to the results of the current draft assembly (available for download here) , the estimated genome size of this new E. coli strain is about 5.2 Mb. Sequence analysis indicated this bacterium is an EHEC serotype O104 E. coli strain; however, this is a new serotype — not previously involved in any E. coli outbreaks. Comparative analysis showed that this bacterium has 93% sequence similarity with the EAEC 55989 E. coli strain, which was isolated in the Central African Republic and known to cause serious diarrhea. This new strain of E. coli, however, has also acquired specific sequences that appear to be similar to those involved in the pathogenicity of hemorrhagic colitis and hemolytic-uremic syndrome. The acquisition of these genes may have occurred through horizontal gene transfer. The analysis further showed that this deadly bacterium carries several antibiotic resistance genes, including resistance to aminoglycoside, macrolides and Beta-lactam antibiotics: all of which makes antibiotic treatment extremely difficult.

The research team will further analyze the integrity of the virulence genes, their expression profiles, drug resistance, and gene transfer mechanisms followed by validation of these genes in other strains. In addition BGI and collaborators are developing diagnostic kits to aid in curtailing this epidemic. New results will be continuously updated. (To obtain immediate updates see Twitter: @BGI_Events.) Source: BGI

The sequences of this new E. coli strain have been uploaded to NCBI (SRA No: SRA037315.1) and are also available for immediate download at ftp://ftp.genomics.org.cn/pub/Ecoli_TY-2482. 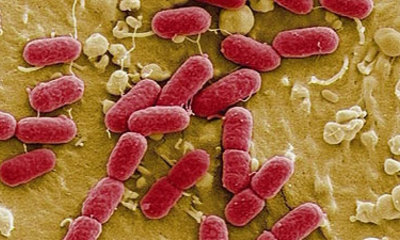 A spokesperson for the department said that all current reported cases are with children and that no specific food has been linked to the outbreak. Pronews 7 has confirmed that four of the seven kids were hospitalized. While the investigation into the outbreak is ongoing, health officials said possible sources could include international travel, exposure to infected animals and human-to-human contact with infected individuals. Area physicians have been told about the outbreak and are working with the public health department to quickly identify any additional cases and potential risk factors.(NewsChannel10)

CDC is following a large outbreak of Shiga toxin-producing E. coli O104, or STEC O104, infections currently going on in Germany. As of May 31, 2011, the Robert Koch Institute (RKI), Germany's disease control and prevention agency, has confirmed six deaths and 373 patients with hemolytic uremic syndrome, or (HUS) (kidney failure), a life-threatening complication of E. coli infections.

The strain of STEC causing illness, STEC O104:H4, is very rare. CDC is not aware of any cases of STEC O104:H4 infection ever being reported in United States. Any person with recent travel to Germany with signs or symptoms of STEC infection or HUS, should seek medical care and let the medical provider know about the outbreak of STEC infections in Germany and the importance of being tested. Symptoms of STEC infection include severe stomach cramps, diarrhea, which is often bloody, and vomiting. If there is fever, it usually is not very high. Most people get better within 5–7 days, but some patients go on to develop HUS—usually about a week after the diarrhea starts. Symptoms of HUS include decreased frequency of urination, feeling very tired, and losing pink color to skin and membranes due to anemia.

STEC infections can be spread from person to person. The best defense is careful, thorough hand washing. Persons returning from Germany who have diarrhea should be sure to wash hands well with soap and warm water after using the bathroom, and should not prepare food for others while they are ill. People who are in contact with ill people who recently visited Germany should also follow basic hygiene practices carefully, including washing their hands thoroughly before eating or drinking and after caring for an ill person.

A very rare strain of Shiga toxin-producing E. coli, or STEC has been reported from some patients in the outbreak. This strain, E. coli O104:H4 has never been seen in the United States, and CDC is only aware of few reports of this strain from other countries. Although it is rare, the United States' public health surveillance systems are designed to be able to identify this, and other rare STEC strains, in ill people. However, the ability to detect STEC infections through surveillance depends on proper diagnostic testing of patients presenting with symptoms suggestive of STEC. In 2009, CDC published recommendations for the diagnosis of STEC infections by clinical laboratories. The illness that it causes is similar to that caused by E. coli O157:H7 which is also a Shiga toxin-producing E. coli and the one most commonly identified in the United States. (FoodPoisoningJournal)

This is the 6th paroxysmal eruptive episode at Etna volcano, Italy since February 16, 2021. After 5 impressive paroxysms, the activity at the volcano intensified again at 19:00 UTC on February 24 and evolved into another spectacular event. Video courtesy Gio Giusa...

The recent data from the Gaia space observatory has allowed astronomers, for the first time, to create a large 3D atlas of widely separated binary stars--1.3 million of them, within roughly 3 000 light-years of Earth. The atlas, generated by Ph.D. astrophysics...

Radioactive cesium fivefold higher the permitted levels have been detected in a black rockfish found in northeastern Fukushima Prefecture in Japan, a local fishing association announced on Monday, February 22, 2021. Roughly 500 becquerels per kilogram of cesium was...

A very intense earthquake swarm started close to Fagradalsfjall in Reykjanes Peninsula, Iceland on the morning of February 24, 2021. The strongest in the sequence so far was M5.7, 3 km (1.8 miles) SSW of Keilir at 10:05 UTC, followed by numerous aftershocks. The...

A flank eruption began to form on the northwestern slope of the Klyuchevskoy volcano, Kamchatka, Russia late February 17, 2021, presenting a real danger of mudflows for the Kyuchi village. Bright incandescence was observed at video-data by IVS FEB RAS from 15:23 UTC...

Heavy rainfall since mid-February has triggered widespread, severe flooding in Madre de Dios, Peru, leaving at least 15 000 people affected and thousands of property damage. This has prompted the government to declare a state of emergency for the region for 60 days....

Researchers at the European Center for Medium-range Weather Forecasts and TU Freiberg developed a new framework to improve forecasting of extreme rainfall events in Mediterranean countries. The scientists noted that it was challenging to predict how many days in...

SERNAGEOMIN has raised the technical alert for Laguna del Maule Volcanic Complex from Green to Yellow on February 22, 2021, after an increased number of earthquakes detected over the past two weeks. The Southern Andes Volcanological Observatory (OVDAS) detected 533...

A brilliant fireball streaked across the skies of Alberta, Canada, at 13:23 UTC (06:23 LT) on Monday, February 22, 2021. The American Meteor Society (AMS) received more than 400 reports and 100+ videos from witnesses as far north as Pink Mountain in British...