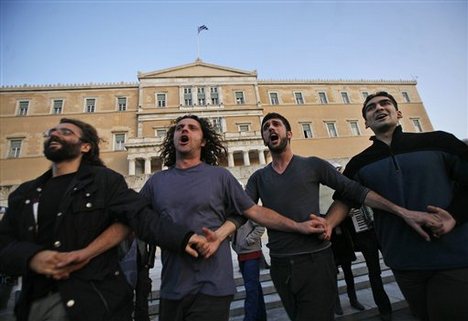 Thousands of Greek protesters staged a massive peaceful protest in the center of capital Athens and many cities across the country on Wednesday over austerity measures. Over 15,000 people, according to police estimations – youths on bikes and families in their majority – gathered in front of the parliament building in Athens, chanting slogans such as “We woke up. What time is it? It is time those who created the crisis left”.

Another 5,000 gathered in the northern city of Thessaloniki and similar protests were planned in the cities of Patras, Ioannina, Iraklio and others.

Plans for the protest quickly spread by word of mouth after a Facebook posting on Tuesday that rapidly drew several thousand adherents. “We wish to gather peacefully and spontaneously,” the event managers said in the posting. “We state our indignation against the crisis, against those who led us to this point. No parties, teams or ideologies,” they said. 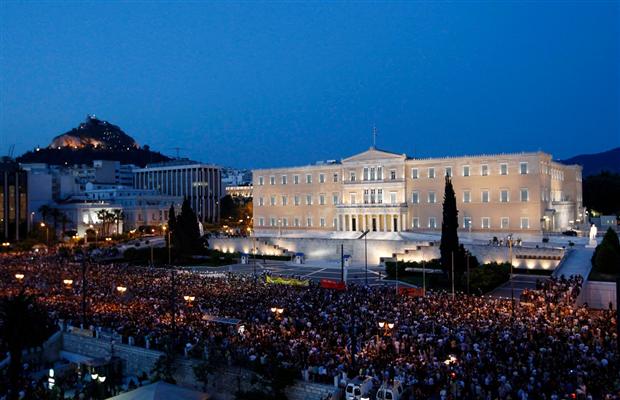 The protests were modelled on a similar mobilization in Spain this week, although the Greek version showed no particular preparation for a sit-in. Most of the protesters brought along friends and chatted with their backs to parliament, cradling coffee or sipping beer.

A part of protesters on Wednesday requested a referendum on the painful three-year austerity and reform plan introduced last year to tackle a severe debt crisis which hit Greece in late 2009.

Greek government spokesman George Petalotis rejected though such a referendum on additional austerity measures or an exit from the euro zone, as well as the idea of snap elections, shortly after Greek Prime Minister George Papandreou briefed Greek President Karolos Papoulias on the latest developments on Wednesday.

The country’s two main private and public-sector unions, GSEE and ADEDY, have already announced a 4 June protest in Athens ahead of a general shut-down and workers at three state entities targeted for sale have mobilised.

Greece is to begin a $50 billion privatization program of the state telecommunications holding company OTE, and two ports, the port of Piraeus and the port of Thessaloniki. This was announced at a press briefing in Athens, by government spokesman Giorgos Petalotis, May 24th. According to him there are also plans in place to cut spending by 28 billion euros.

The sale of the stake in OTE will take place immediately. The second phase will be to sell shares of the state energy company PPC, the water company EYDAP and the Post Bank. In exchange for a tight fiscal program, Greece will receive a $110 billion loan from the EU and the IMF.