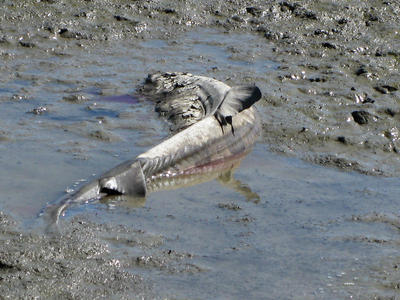 An alarming number of sick, dying and dead leopard sharks have been turning up on the shores of Richardson Bay over the past two weeks, but researchers are baffled as to what is causing the problem, observed elsewhere in the Bay Area as well.

The period of April through June is when leopard sharks enter shallow waters, like those in Richardson Bay, to spawn. This year, some are not leaving.

“I first noticed one April 10, it was acting bizarre,” said Kerry Wilcox, sanctuary manager at the Richardson Bay Audubon Center and Sanctuary. “It was bumping into pilings and stranding itself on rocks and was coming into water that was shallower and shallower.” 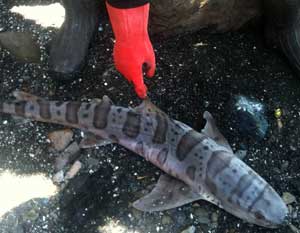 Starting May 2, Richardson Bay Audubon Center and Sanctuary researchers began to scour beaches along Richardson Bay after high tide. Since then, more than 20 have turned up dead.

“The leopard sharks are here this time of year anyway, but we don’t know if that’s why we are seeing dead ones or if they are being washed here,” Wilcox said. “There are all sorts of questions.“

More than 100 of the sharks have washed ashore in San Mateo, San Francisco and Marin counties over the past month.

The sharks need a certain amount of salinity to survive, but with all the rain that has fallen this year there may be too much freshwater in the bay. A similar die-off occurred in 2006 after heavy rains

But the evidence for that theory is not conclusive. Another theory is that there is a lack of oxygen in the water. Samples of the dead sharks have been taken for analysis. Those results will come back in a few weeks and could provide more details.  Leopard sharks are covered with dark splotches and their dorsal surface varies in color from silver to a bronzed gray. The average size of an adult leopard shark is about 4.5 feet and pups are about 8 inches long.

They feed primarily on invertebrates and small fish. Crabs, shrimp, octopi, shiner perch, bat rays and a variety of fish eggs are part of their diet.

Marine mammals prey on young leopard sharks, and both juvenile and adults are vulnerable to large fish, including great white sharks. The sharks pose virtually no danger to humans, but they do contain high levels of mercury and should not be consumed regularly, according to state officials. (InsideBayArea)