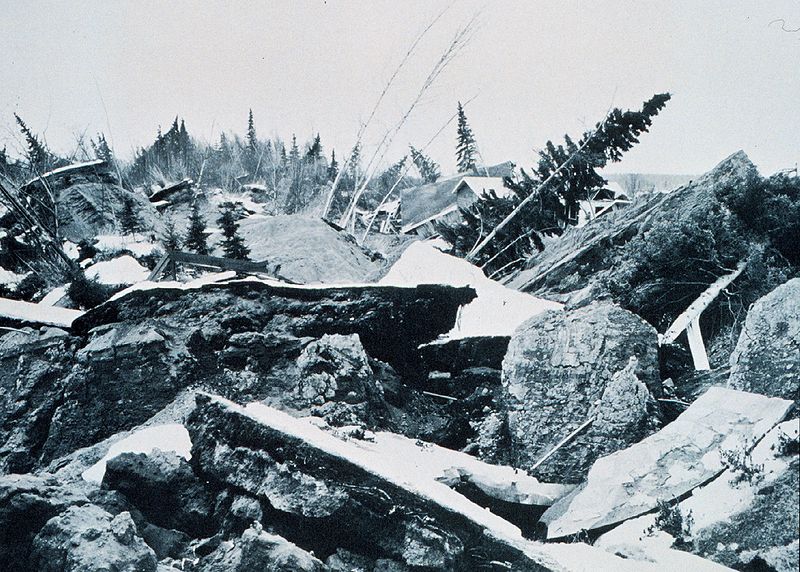 The 1964 Alaska earthquake, also known as the Great Alaskan Earthquake, the Portage Earthquake and the Good Friday Earthquake, was a megathrust earthquake that happen on Good Friday, March 27, 1964. Across south-central Alaska, ground fissures, collapsing buildings, and tsunamis resulting from the earthquake caused about 131 deaths. 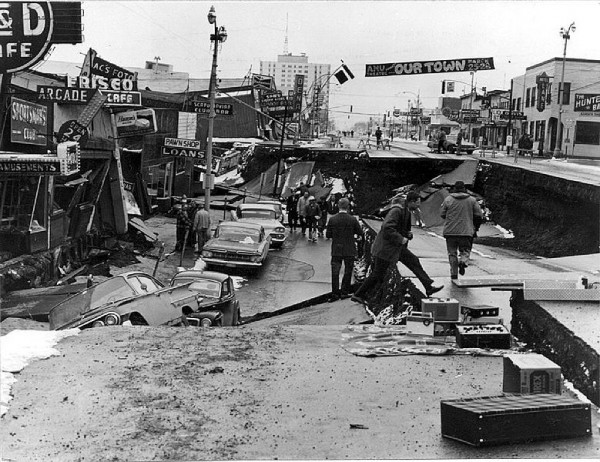 The powerful earthquake produced earthquake liquefaction in the region. Ground fissures and failures caused major structural damage in several communities, much damage to property and several landslides. Anchorage sustained great destruction or damage to many inadequately engineered houses, buildings, and infrastructure (paved streets, sidewalks, water and sewer mains, electrical systems, and other man-made equipment), particularly in the several landslide zones along Knik Arm. 322km (200 miles) southwest, some areas near Kodiak were permanently raised by 9.1 m (30 feet). Southeast of Anchorage, areas around the head of Turnagain Arm near Girdwood and Portage dropped as much as 2.4 m (8 feet), requiring reconstruction and fill to raise the Seward Highway above the new high tide mark. 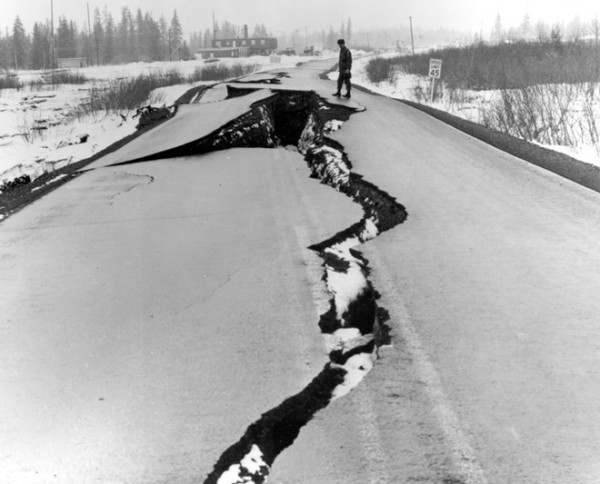 In Prince William Sound, Port Valdez suffered a massive underwater landslide, resulting in the deaths of 30 people between the collapse of the Valdez city harbor and docks, and inside the ship that was docked there at the time. Nearby, a 8.2 m (27-foot) tsunami destroyed the village of Chenega, killing 23 of the 68 people who lived there – survivors out-ran the wave, climbing to high ground. Post-quake tsunamis severely affected Whittier, Seward, Kodiak, and other Alaskan communities, as well as people and property in British Columbia, Oregon, and California. Tsunamis also caused damage in Hawaii and Japan. Evidence of motion directly related to the earthquake was reported from all over the earth.

At 3:36 a.m. March 28, 1964 UTC, a fault between the Pacific and North American plates ruptured near College Fjord in Prince William Sound. The epicenter of the earthquake was 20 km (12.4 mies) north of Prince William Sound, 125 km (78 miles) east of Anchorage and 64 km (40 miles) west of Valdez. The focus occurred at a depth of approximately 25 km (15.5 mies). Ocean floor shifts created large tsunamis up to 67 m (220 feet) in height, which resulted in many of the deaths and much of the property damage. Large rockslides were also caused, resulting in great property damage. Vertical displacement of up to 11.5 m (38 feet ) occurred, affecting an area of 250,000 km² (100,000 miles²) within Alaska.

Studies of ground motion have led to a peak ground acceleration estimate of 0.14 – 0.18 g. 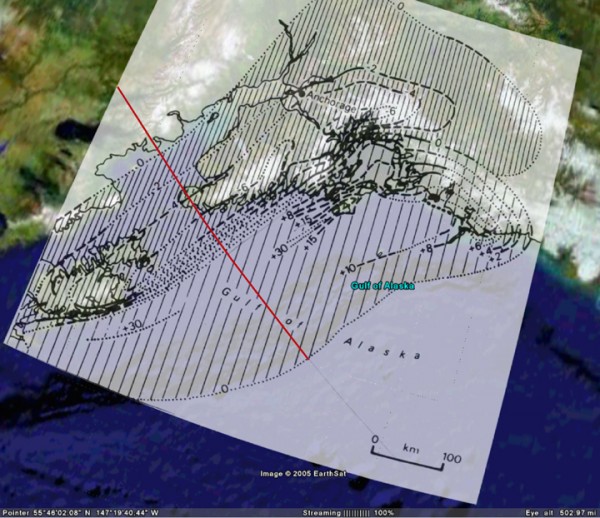 The Alaska Earthquake was a subduction zone earthquake (megathrust earthquake), caused by an oceanic plate sinking under a continental plate. The fault responsible was the Aleutian Megathrust. It was a reverse fault caused by a compressional force. This caused much of the uneven ground.

The northwestward motion of the Pacific plate at about 5 to 7 cm per year causes the crust of southern Alaska to be compressed and warped, with some areas along the coast being depressed and other areas inland being uplifted. After periods of tens to hundreds of years, this compression is relieved by the sudden southeastward motion of portions of coastal Alaska as they move back over the subducting Pacific plate. 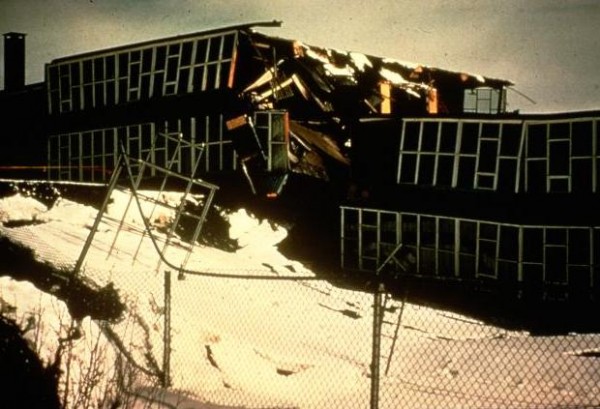 As a result of the 1964 quake, the Latouche Island area moved about 18 meters to the southeast. Also, the patterns of uplift and subsidence which had been slowly developing prior to the earthquake were suddenly reversed, with areas around Montague Island being uplifted 4-9 meters and areas around Portage down-dropped as much as 3 meters.

The hinge line (line of no vertical change separating the uplift and subsidence zones) extended from near the epicenter in Prince William Sound to the SE coast of Kodiak Island. This vertical deformation affected and area of approximately 250,000 km² (100,000 miles²).

The end result was the movement of the Pacific plate under the North American plate by about 9 meters on average.

Thousands of aftershocks were recorded in the months following the mainshock. In the first day there were 11 aftershocks with magnitudes greater than 6.0; in the next three weeks there were 9 more. Smaller aftershocks continued for more than a year.

Much of the damage and most of the lives lost were due to the effects of water waves. These were mainly of two kinds: the tsunami of open-ocean sea wave – generated by large-scale motion of the sea floor, and the local wave –  generated by underwater landslides in bays of fiords. 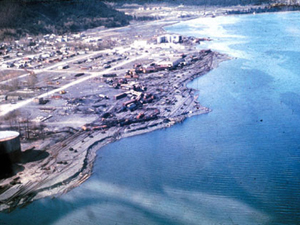 The 1964 Alaska tsunami was the second largest ever recorded, again following only the one caused by the 1960 Chile earthquake (4 m). Of the 119 deaths attributable to the effects of the ocean, about one-third were due to the open-ocean tsunami: 4 at Newport Beach, Oregon,  12 at Crescent City, California and about 21 in Alaska. Local waves claimed at least 82 lives. Maximum height reported for these waves were 70 meters in Valdez Arm.

Seiches, a sort of sloshing of water back and forth in a small body of water like a boat harbor or swimming pool, were observed as far away as Louisiana where a number of fishing boats were sunk. Oscillations in the height of water in wells were reported from as far away as South Africa.

In addition to damage in the epicentral region immediately following the quake, long period seismic waves traveled around the earth for several weeks. Basically the whole earth vibrated (rang) like a church bell during this time. States as far away as Texas and Florida were affected with vertical motions of up to 5 to 10 cm. 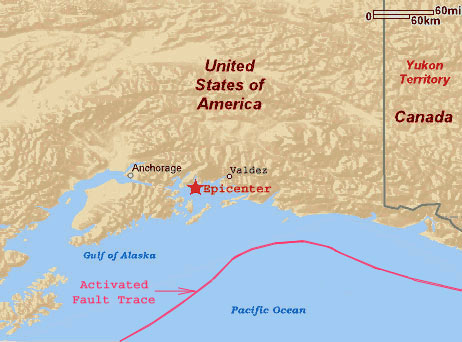 After the Great Alaskan Earthquake of 1964: