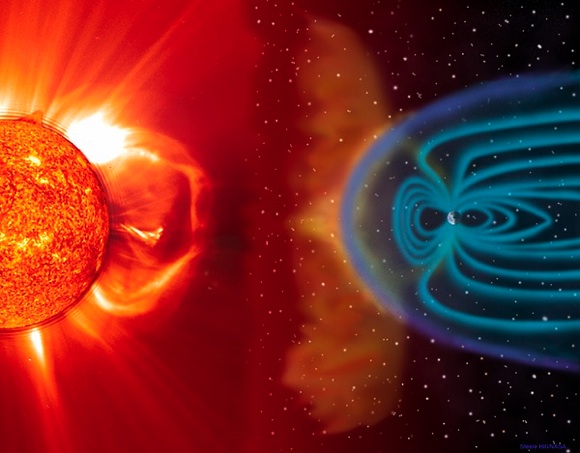 NOAA administrator Jane Lubchenco warned at the annual meeting of the American Association for the Advancement of Science, that a severe solar storm has the potential to take down telecommunications and power grids, and the country needs to work on being better prepared.

"This is not a matter of if, it's simply a matter of when and how big," Lubchenco said of the potential for a dangerous solar flare. "We have every reason to expect we're going to be seeing more space weather in the coming years, and it behooves us to be smart and be prepared." 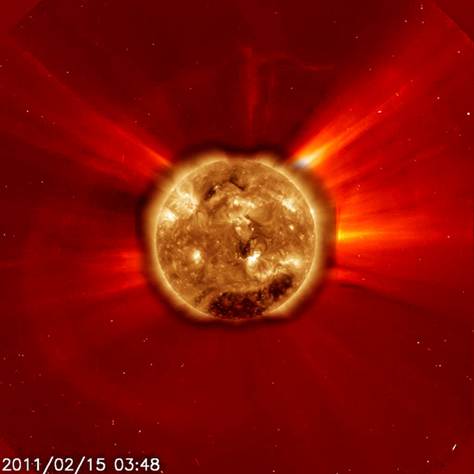 The image of the powerful Class X2 solar flare of February 14, 2011, shows how it appeared to both the Solar Dynamics Observatory in extreme ultraviolet light (center sun disk) and the SOHO's C2 coronagraph. This was the largest flare in more than four years. (Credit: NASA/SDO/SOHO)

The space weather threat is becoming more dire as our sun ramps up toward its period of solar maximum, predicted for around 2013.

The February 14 flare unleashed a wave of charged particles that streamed immediately toward Earth, as well as coronal mass ejections (CME) that took days to arrive to our planet and interacted with Earth's magnetic field to cause geomagnetic storms that wiped out radio communications in the Western Pacific Ocean and parts of Asia, and caused airlines to reroute some polar flights to avoid radio outages.

Experts say we got off fairly lucky with this recent solar storm, and that future eruptions could cause worse damage, particularly to the sensitive transformers and capacitors in power grids. If some of these were harmed, there could be power outages for days, weeks, months, or even, in the case of severe damage, years.

Space weather hasn't posed quite such a threat before, because during the last solar maximum, around 10 years ago, the world wasn't as dependent on satellite telecommunications, cell phones and global positioning system (GPS) – all technologies that could be disrupted by solar flares.

"Many things we take for granted today are so much more prone to the effects of space weather than was the case during the last maximum," Lubchenco said. "The problem is likely to get even worse as the world could likely become more technologically dependent by the time the next solar maximum rolls around, and the next."

Other experts agree that the risk must be addressed. European officials said the world needs greater international cooperation to meet the threat of dangerous space weather.

"There are few emergency scenarios today that require such close cooperation across the Atlantic as a geomagnetic storm," said Helena Lindberg, director general for the Swedish Civil Contingencies Agency (MSB).

There is work being done to improve our ability to forecast solar storms in advance, equip more satellites with radiation shielding and fortify power grids with resilient transformers and capacitors.

"Please don’t panic," said Stephan Lechner of the Institute for the Protection and Security of the Citizen at the European Commission's Joint Research Centre. "Please don't leave the room and tell everybody that space weather will kill us tomorrow."